The Palmer United Party is proving that success in business doesn’t equal sense in politics. 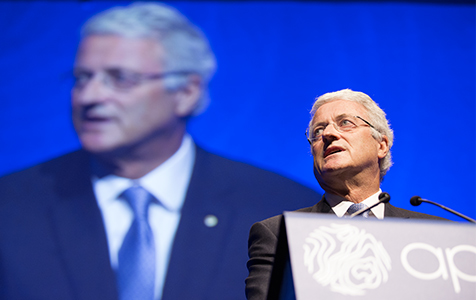 FLAG BEARER: Michael Chaney would bring more gravitas to any political role than Clive Palmer, whose populist antics display his party’s lack of a core ideology.

I am one of many people who believe political parties, and governments, should include more people from the business community.

I've often suggested that business leaders offer a can-do mentality, the willingness to take on risk, and have experience of the real world where decisions can't just be put off for another day or sent off to a committee until they are ground into dust.

In the past I have put names forward such as Andrew Forrest, David Flanagan and Michael Chaney as potential candidates for political leadership.

Logic suggests that the business world contains an abundance of qualified, energetic and committed people who will steer this nation in the right direction based on strategic thinking rather than tactical reaction.

But theory and practice are two very different things.

Clive Palmer offers strong evidence that success in business does not make someone the right person to be in charge of government, let alone influence it.

Mr Palmer and his eponymous Palmer United Party have helped me change my mind. If this what a business leader does when given just a hint of political power, then perhaps such people ought to be banned.

I won't be telling readers much they don't already know when I speak of his antics, but I find the lack of a core ideology and the toing and froing on populist policy simply too disturbing to find charming, at best, or amusing, at worst.

Whether or not you agree with Tony Abbott's agenda, he was elected on it and ought to be given a go at implementing it.

When Labor's Kevin Rudd came to power, most people accepted that he had a mandate to change certain things, such as industrial relations laws. The opposition let him do much to achieve his ends, though arguably he went too far when he tried to make Australia a global leader in the climate change debate. I'm pretty sure Australians had not voted for that, or a mining tax.

Ultimately, while the long-term influence of Mr Palmer and PUP is unknown, perhaps I need to be more cautious when I consider what degree of business success might translate to be the kind of political leaders we need.

Many successful business leaders, most notably those with billionaire status, have amusing idiosyncrasies; but those who are widely admired seem to keep the wastefulness of their private past-times to a minimum. Can you imagine Warren Buffett or Bill Gates wanting to build a replica of the Titanic or turning a resort development into Jurassic Park?

The appointment of David Buckingham as CEO of internet service provider iiNet is a strong signal that the board has confidence in the business's direction and management.

I am always a fan of the internal succession story. It is usually better for the board to know how someone operates before they appoint them as CEO and, from the individual's point of view, they get to see the internal workings of the business and its culture.

The try-before-you-buy strategy usually has less upheaval about it – so it typically signals a company that is confident in its strategy.

One must also assume that the successor, being something of an incumbent, has the advantage of offering a realistic pitch for the job, knowing the numbers and the culture is a distinct advantage when proposing the phase in a company's development.

Intriguingly, Western Australia's two leading companies, Wesfarmers and Woodside Petroleum, have taken opposite approaches to this process. Wesfarmers always recruits from within, while Woodside's past two CEOs have come in fresh to the business.

A third way is the hybrid, where a short-term appointment to a key management team role is made with a view that the individual will soon be CEO. Sometimes this is really just a swift try-before-you-buy approach, but sometimes it is a slightly longer process which involves as much grooming of an individual selected for their potential as it does testing their mettle.

I often see appointments such as chief operating officer as code for future CEO. And, as a close observer of these things, I also take note how often these appointments fail and the person is given their marching orders. An appointment as a future CEO leaves little room to move if the fit isn't right.

In the case of iiNet, if Mr Buckingham was selected with an eye to taking over as CEO when that time seemed a long way into the distant future.

He joined iiNet seven years ago, after the company was entering a recovery phase from the 2006 near-implosion. Clearly his skills as chief financial officer were much needed at the time, so this looks like more of a genuine in-house succession by someone who has grown into the role.