Clive Palmer has dismissed the gathering of CITIC Pacific Mining employees outside the Supreme Court of Western Australia this morning, ahead of the start of the trial between his private company Mineralogy and Citic over royalties, as a ‘Chinese tactic’. 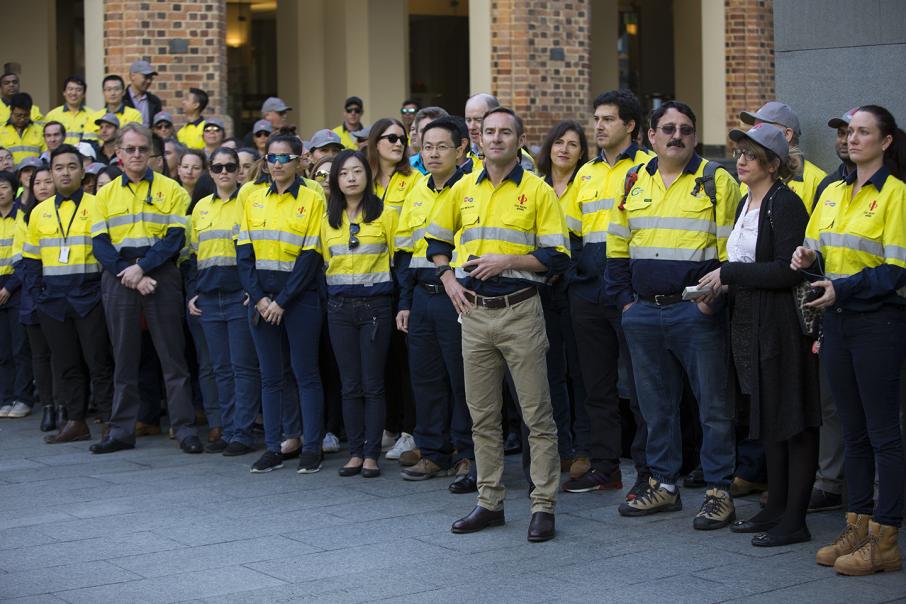 Citic Pacific workers gathered outside the Supreme Court this morning to applaud the company's lawyers as they entered the building. Photo: Attila Csaszar

Clive Palmer has dismissed the gathering of CITIC Pacific Mining employees outside the Supreme Court of Western Australia this morning, ahead of the start of the trial between his private company, Mineralogy, and Citic over royalties, as a ‘Chinese tactic’.

Ahead of the first hearing , workers from Citic Pacific – the wholly-owned subsidiary of China-based CITIC Limited - gathered outside the Supreme Court to applaud the company’s lawyers as they headed in.

The companies have been embroiled in legal battles for several years but the three-week trial focuses on the main dispute between the parties relating to calculations for royalty payments from the multibillion-dollar Sino Iron mine, which draws ore from Mineralogy-owned land.

“At Sino Iron, we’ve got 2,600 direct and indirect employees, we’ve got a direct workforce of 1,500 people and a direct contract employment of 1,100, and in terms of the project itself we’ve had some great achievements in the last 24 months,” Citic Pacific Mining head of corporate affairs Rob Newton told reporters outside the court.

“We’ve spent a lot of time and money on this project ... and we’ve got a lot of challenges at a project level.

“These matters are often described as a dispute between China and certain individuals, but we are Citic Pacific Mining, and we are the developers and operators of the Sino Iron project, and we are Western Australians.

“Ninety-five per cent of our staff here would be Australian residents and we do our best to see this project succeed for our shareholders and for Western Australia; but in return we rely on this project to put food on our tables and to secure the economic future of ourselves and our families, hopefully for many years to come.”

But Mr Palmer dismissed the gathering as a Chinese tactic.

"This is just part of the overall pattern of the Chinese government taking control of our society and trying to undermine our sovereignty," Mr Palmer said outside court later in the day.

The former Palmer United Party leader also took a swipe at China and blamed Citic for the collapse of his Queensland Nickel business.

"Some of these funds were earmarked for programs over there," he told reporters.

Mr Palmer also said the Sino mine would never close.

Mineralogy was the first party to give opening statements today, and has alleged it is owed $US149.4 million in royalty payments for the $US1.31 billion of magnetite product that has been shipped from Sino Iron since production began in 2013.

Mineralogy is also seeking an alternative payment for damages, plus interests and costs, although the size of that payment is yet to be disclosed.

First ore was achieved at the mine in late 2013 but the operation didn’t come into full production until June last year when the final two of six magnetite ore processing lines entered production.