Pair pitches in for community

Two Perth event planners have taken rejection in their stride, launching one and planning another urban recreation event to enliven the city at their own expense. 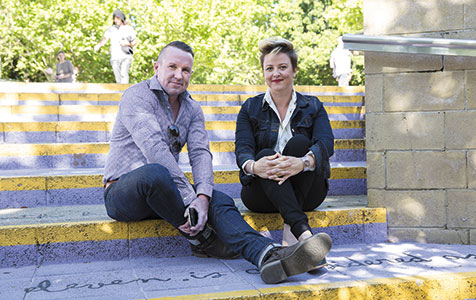 COUGHING UP: Nikki Graski and Aaron Gill are paying for community projects out of their own pocket. Photo: Attila Csaszar

Two Perth event planners have taken rejection in their stride, launching one and planning another urban recreation event to enliven the city at their own expense.

Despite having the funding door shut by city stakeholders, Nikki Graski and Aaron Gill launched their first venture, Winterland, in July.

The outdoor ice-skating rink in the Perth Cultural Centre ran for two weeks during the July school holidays.

Now they’re planning to bring a 300-metre waterslide to Perth for the summer, with St Georges Terrace in mind as the venue.

However, the pair is staying mum on the possibility of any further events, as they’ve been unable to secure founding investors to support their vision.

The pair decided to launch the Winterland ice skating rink as an initial project after becoming fed up with decades of work in the music festival industry.

“We’re seeing an opportunity here in Perth where something new needs to happen,” Mr Gill said.

“Basically Perth shuts down in winter so [Winterland] was the only thing that we could think of that would bring people out.”

They were largely successful, with more than 30,000 people buying tickets to the skating rink over the two weeks.

The Art Gallery of WA also reported an increase in visitation, which it said could have been due to the increased activity in the cultural centre.

However Ms Graski and Mr Gill contributed most of the funding for the Winterland skating venue and attached outdoor bar, with little buy-in from local governments or agencies.

The pair said the Metropolitan Redevelopment Authority was enthusiastic about the plan and did a lot to get it up and running, but it was a solitary supporter.

Ms Graski said they initially thought it would be easy to attract support from agencies such as the Committee for Perth and City of Perth.

“We thought we had a great idea, but when we went out to present it nobody got on board,” she said.

“We’re the ones that were taking the risk to make that space vibrant, but we were doing it without support.”

“We couldn’t open doors,” he said. “Even though we knew all these people from other events.”

The pair is encountering a similar scenario with the plan to bring the waterslide to Perth, but told Business News they would provide the capital if necessary to make it happen.