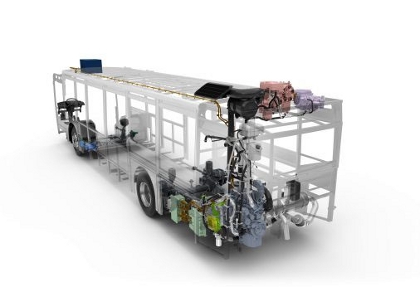 An artist's composite of the Volvo's hybrid system which will be trialled on Perth streets.

The Public Transport Authority of Western Australia has announced a year-long trial of a hybrid bus to run along inner city CAT routes.

The PTA has partnered with Swedish automotive giant Volvo for the trial, which will see a Volvo B5RH hybrid bus used in the CBD.

“The CAT service in Perth is an ideal place for this technology,” Volvo Buses Australia general manager Peter Duncan said.

“Low average speeds, high idle time, a single depot location and congested city streets are where we have seen our technology shine overseas.”

He said the Australian climate would pose different challenges, however, than those experienced in trials over the past five years in northern Europe.

“We need to understand how our existing, proven technology will perform in Australian conditions and we have a strong focus on issues such as layout, cooling, air-conditioning performance and battery life,” he said.

“We don’t have all the answers which is why we are pleased to be in partnership with PTA with a long term view.

“A trial of new technology is a logical next step based on the long term partnership between our organisations. We are prepared to learn together.”