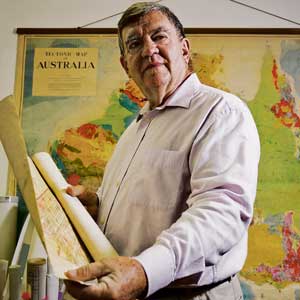 Dennis O' Meara is grateful his life of prospecting has allowed him to plant trees, engaging in revegetation of the bush well before any company adopted it as standard policy.

"All those years as a prospector I've been able to keep up my contact with remote areas and in particular native trees and unusual trees. But basically I'm a prospector," Mr O'Meara said.

"I'm involved in the mining and mineral exploration industry. Along the way, the trees have taken precedence in some people's minds and it's certainly important to my lifestyle because I just have a lot of fun growing them.

"But basically it's because I'm a prospector that I've been able to do that."

Mr O'Meara has been part of the mining industry, and the outback, for as long as he can remember, having started life in Wiluna and taken up his first job in Mount Magnet at the mines registrar.

He has had a lifelong career in the WA mining industry, and has been influential in the success of companies like de Grey, Jubilee, Montezuma and Atlas Iron to name a few.

But it was the activities of his company Outback Tree that earned him an Order of Australia medal this year for service to the environment, through native tree propagation and revegetation programs, to the mining industry and the Pilbara.

To Mr O'Meara, tree planting has always been an integral part of prospecting and life in the outback, since he first set up a nursery and an informal tree planting scheme at the mines registrar.

"Marble Bar was the hottest town in Australia. It was listed in the Guinness Book of Records with the longstanding hottest record of 160 consecutive days, when in 1923-24 it was over 38 degrees every day," he said.

"When my wife and I first married and she came up in 1960, you had no power after 8 o' clock at night, no air-conditioning, so it was pretty hard, particularly on young brides coming up remote.

"There was not a lot out there in those types of areas and I suddenly realised that we didn't have any shade, that's how it started. We started the scheme in the mines department, and somebody would come and buy a miner's right and they'd walk out with a little gum tree. We'd give them a gum tree and say, 'go and plant this tree'."

With a passion for the lifestyle of the outback, Mr O'Meara said despite public misconceptions, the connection between prospecting and the environment was a close one.

"To me, among the people who associate with the bush and the mining and exploration side, I've yet to meet in my whole lifetime someone who doesn't have an affinity with the environment," he said.

"When you look at the history of mining, there have been things over the years that have probably left people wondering whether it was all worth it, but without mining we can't do the things we do.

"There's only two things in the basic sense of life and one or the other, we exist on what is mined or what is grown, so mining just happens to be ours but we like growing at the same time."

"The plants are part of it, but that was made possible by the prospecting side."

Unique from other tree farms, Outback Tree specialises in species that are native in the Pilbara area, and for that reason is sought out by mining companies and community groups in the region.

"The people who are in remote areas, they want to grow the sort of trees that are suitable, because nurseries don't grow most of the native plants we grow," Mr O'Meara said.

"We're pretty sure of ourselves in that we think we're the only ones who grow those types of plants."

An Acacia cyperophylla var omearana growing "quite happily" outside its natural habitat, in Kings Park, was named after Mr O'Meara after he brought the tree to the Kings Park board to be identified.

Although he is supportive of the policies of mining companies to employ indigenous workers and invest in the community in other ways, Mr O'Meara remembers working with aborigines was just part of outback life.

"We were involved in prospecting and mining with aboriginal people all my life," he recalls.

"We were mining tin and the Aboriginal people were working the plant with us. We were working on their tin mine and paying a royalty," he said.

"The Pilbara Aboriginal people area an integral part of the life situation.

''They were certainly different and white people generally had it better. They did what they wanted but they didn't have the things they should have had.

"But nothing much was unusual in any relationship between whites and aboriginal people, it was just part of life."

What do you think about the up and coming mining companies of today?

They're the people I support. They're the reason I'm still involved in a company or two. The next generation are the people that you must support and if there's any way you can help them, that is very important to me.

How did it feel to have your tree-planting activities recognised by being awarded an OAM?

The reason I got that award was because of the help of a close family unit and a lot of good friends. There has been a lot of interaction between a lot of people.

Has prospecting always been in your blood?

There is prospecting in both my mother and my father's side. It can be very rewarding but can also be very frustrating. It doesn't happen overnight but I've got no regrets.

Why do you have such an affinity for the bush?

Unusual things occur when you live in remote areas. You can be a billion miles from anywhere and you can have unusual adventures and interesting experiences.

What was it like to move from Wiluna when the mine closed down?

I have vivid memories of being in the back of a truck, at night, with my brother and my parents and brother inside with the neighbour driving. We drove for two days before we got to Marble Bar and started again. It was a sad time, but the sadness passed. People were doing that all over WA at the time.