Trevor Eastwood says working on his biography provided unexpected insight into his career. 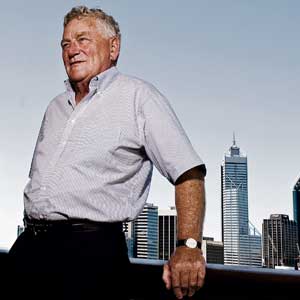 IF anyone has a Western Australian business story worth telling it has to be Trevor Eastwood.

As CEO and then chairman at Wesfarmers, he oversaw the agriculturally focused cooperative's metamorphosis to a retail, industrial and mining conglomerate that boasts Australia's biggest private sector workforce.

During that time Mr Eastwood has been involved in the nation's biggest takeover, battled against political interests groups and safely navigated the troubled waters of WA Inc.

Now he has decided to tell his story in the newly released book The CEO, The Chairman and Board written by Rosemary Sayer and published by Hardie Grant Books.

Hardly one to have tickets on himself, Mr Eastwood says the idea of a biography was not of great interest until his children and close friends encouraged him.

In the end, he reckons it was a good journey.

"It gave me a lot of time to think and reflect on myself and my character," he said.

"There were also the roles other people played in my life, which I just accepted.

"I would have said 'I didn't have a mentor'. It is only when you think about it you realise that someone like John Bennison had such an impact on my life and I had not expressed my gratitude."

Mr Eastwood said he was able to use a private book launch last week to thank in public Mr Bennison, the man who employed him at Wesfarmers, and for whom he mostly reported to until he replaced him as CEO in the early 1980s.

"I learned a lot from his ethics and values."

A good moral compass clearly came in handy for the Wesfarmers chief as he dealt with the wheeling and dealing during the Burke government era of the 1980s, though Mr Eastwood said he only met Alan Bond once - for 10 minutes - for business.

The book offers some great insights on boardroom strategy and corporate governance from a man who has been a director of more than 20 listed companies or major community organisations, including WA Newspapers Holdings, Qantas, BankWest's predecessor R&I, and the WA Art Gallery - the latter reflecting a deep enjoyment of the visual arts.

One of Mr Eastwood's key observations is how boards work differently due to the historical context of their creation.

For instance, he found the boards at R&I and Qantas were heavily involved in the strategy and decision making of the companies, possibly because they had developed from government instrumentalities.

Similarly, many listed companies that had strong links to family business roots had their own issues. In the book, Mr Eastwood notes the difficulties he had coming to terms with the culture at Bunnings when Wesfarmers took its initial 20 per cent stake and he joined that board.

"When the crunch came who was really in charge?" he asks rhetorically, knowing it was the Bunning family patriarchs.

"You need a shock to bring about significant change."

Mr Eastwood remains adamant that boards are there to make sure the CEO stays on the path set. However, there is strength in having experienced directors.

"The role of director is to ensure strategies are appropriate and well thought through and that implementation is both possible and achievable," Mr Eastwood said.

"As a director I often knew the answers to the questions I asked, but I wanted to make sure they did.

"I guess it's a mentoring role."

One interesting insight is that the much-heralded systems at Wesfarmers were not the only ingredient to the company's success.

Mr Eastwood said he learned that talented people were just as critical, otherwise the processes did not work.

He said he took almost two years to fill the position of company secretary and administrator, waiting until the right person came along. That person was his successor, Michael Chaney.

"One of the secrets of our success was we had generational change and we were able to put together a younger group of people who were better trained than their predecessors," Mr Eastwood said.

The book, of course, is not all about business, offering chapters on Mr Eastwood's upbringing and his fascination with cars, which involves racing and collecting classic vehicles.

I have never been a hero worshipper. I have only two people I have sufficient working knowledge of - my predecessor John Bennison and my successor Michael Chaney. I don't believe I know anyone else well enough.

Who was your mentor?

John Bennison, most definitely. He was not just my mentor, he also engineered my whole career.

I'm not sure I pursued a career. Had I not become CEO of Wesfarmers? I don't really know. I have gone where life has taken me, I concentrated on what I was doing. I have no regrets, not the slightest.

I read lots of books about financial controls in the 1980s, it was a hobbyhorse. In more recent times I read more about old cars.

It's like your children; you are not allowed to have a favourite. But mine is an (1930) eight litre Bentley.

Europe, parts of the US and Ningaloo. That [Ningaloo] was my favourite destination, when we started going we would not see anyone for two weeks. It's not the same now.

What are you going to do next?

I have some plans for motoring and travel. I'd also like to spend more time at my Mandurah house.