He may have made WA his home, but Tim Atterton still wants England to win the Ashes. 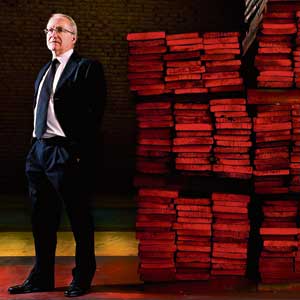 IT would be difficult to find anyone more enthusiastic about entrepreneurship than academic-turned-adviser, Tim Atterton.

So it's little wonder that he found his way from the cold climes of northern England to settle his family in Western Australia, a place most would acknowledge is entrepreneurial to its roots.

"What fascinates me is the concept of entrepreneurship," Mr Atterton told WA Business News.

"Not just starting a business ... Fiona Stanley is the best example of entrepreneurship you'll find in this state; well, one of the best."

Mr Atterton first came to WA in 1994, when the Curtin Business School was establishing a unit devoted to entrepreneurship and business development.

He was lured out as a visiting consultant from his role as executive director of the Entrepreneurship Centre at Durham University Business School, coming to WA regularly and staying longer on each occasion.

After a few years the unit ran into financial difficulty and Mr Atterton said he convinced both Curtin and Durham to let him have a year to sort it out, having fallen for life in Perth.

But it's not just that.

Mr Atterton admits he likes the great outdoors and, as a sporting tragic, has plenty to entertain him in that regard - even if he still secretly supports England in their fight to win the Ashes.

His temporary move grew to six years, before a falling out with the university hierarchy ended his high-profile role at the head of the unit and its key 'growth program' for small businesses.

"I probably stayed at Curtin too long," he says.

"I always planned to stay at Curtin for three years, and then laziness set in and I stayed for six. I probably outstayed my welcome. My brief was to turn the unit around, and I did that.

"We had gone through the entrepreneurial phase, we were back in the black, I should have moved on then, but any executive would have a story to tell like that.

"The reality was I was probably too entrepreneurial for them as an institution, and the more successful we were the more above the radar we became and it was all very well for the business school to say 'don't worry about our rules and procedures, you are doing a good job', but in the end they needed someone who was going to better fit into the system.

"Technically I resigned. In hindsight, I have nothing but thanks for Curtin because they gave me the mechanism to get over here."

Coinciding with this setback was his decision to step down as chair of the Small Business Development Corporation, ending a six-year relationship that started after an accidental meeting with politician Clive Brown, whom he ear-bashed about the bad deal Australia gives small business.

Since 2006, Mr Atterton has built a consultancy around his previous academic work.

"I love working with entrepreneurs," he says. "I have what I call my family of essentially four really nice businesses I work with as a strategic adviser or non-exec director," Mr Atterton says, naming Outback Ecology, WA Asset, Complete Fire Design and Scafwest as the group that he works most closely with.

His other clients include well-known businesses such as Steel Blue, and also he does training in areas such as financial dynamics.

His view is that successful business marries the culture of entrepreneurship and an ethic of discipline.

"What I try to do is provide that bridge between theory and practice, I help people take the theory of strategic planning and implement it," Mr Atterton says.

"If I have a reputation for anything it's helping small businesses understand their financials and use them for strategic planning purposes.

"It's about looking at your financials, not so much the P&L but mainly the balance sheet and actually understanding how to make better business decisions. I have a real prejudice that Australian small businesses tend to be terribly tax driven. As a result they don't build the net worth of the businesses, they have a change of wind like we've just had and they really struggle."

A little less than a third of his time is spent consulting offshore, with his current time taken up significantly by two key jobs - east Africa and Abu Dhabi.

In Kenya and Tanzania he is helping to develop a program for 12 micro-finance institutions that lend to about 250,000 people. It is funded out of the US by a foundation called Unitas, which wants to expand the lending significantly.

"I am running the strategic planning, leadership and change management program. I am basically training the CEOs. They are not run as not for profits. These are for profit businesses run by entrepreneurial people. Philanthropy is the bonus; it is certainly not the means to the end," Mr Atterton says.

"The impacts these projects can have are really quite stunning."

In complete contrast is his work with the Khalifa Fund in Abu Dhabi, a $1 billion fund established by the local sheik to diversify the rich, oil-soaked economy.

"There's no hunger there but there's also no entrepreneurial spirit, they are very risk averse."

Can you teach someone to be an entrepreneur?

"Absolutely. I'm not saying some people aren't born more entrepreneurial than others, quite clearly they are, you'll always get your Andrew Forrests.

"If you define entrepreneurship as a set of skills and competencies you can try, certainly, to stimulate them, there is no doubt about that. Sometimes the raw material is better than other times."

What does the global financial crisis mean for entrepreneurs?

"Probably the best time to start a business is now.

"The most successful start-ups I have been involved in were formed or forged during recession because, I think, you have to be a good manager to run a business in difficult times.

"It's no fault of theirs, they simple haven't needed to develop the management skills you have to have when times are bit tough."

Was the decision to stay in Perth an easy one?

"Who'd want to go back to the north of England? My kids had gone native and my wife said she'd chain herself to the railings if we went back to the UK."

"I am into reading about Western Australia a lot at moment.

"I've been here 10 years and much to my embarrassment I don't know much about our history. I am reading Geoffrey Bolton's book Land of Vision and Mirage.