Peter Quinn works in a realm of complexity few of us could imagine. 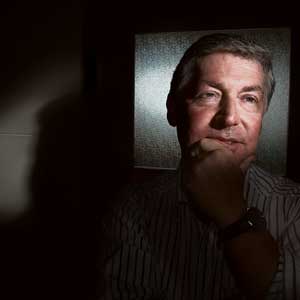 FEW people publicly declare their professional interests to be "dark matter", but it's a formidable subject that has occupied UWA astronomy professor Peter Quinn for more than a decade.

While it may be of little immediate consequence to the average Joe, dark matter makes up about 90 per cent of the universe and understanding it is instrumental in getting to grips with how galaxies and the universe work.

As professional goals go, understanding dark matter is a challenge of Everest-size proportions.

It is reassuring, then, that the man appointed director of Western Australia's bid to secure the Square Kilometre Array (SKA) radio telescope project is not afraid of a challenge. Working with the state and federal governments and the CSIRO, Professor Quinn will be coordinating moves to ensure the $2.5 billion telescope is built in WA's Mid West.

The technical advantages of the project may be somewhat overpowering to those less-than-versed in the fields of astroradiology, but Professor Quinn says the best thing about astronomy is that it is, by nature, an interesting subject.

Leafing through his colourful coffee table (sized) book on galaxies he maintains it's a subject that can be discussed with everyone, from children to global experts, on varied but equally satisfying levels.

"Who isn't fascinated by the night sky? It is a privilege to be in a job where you always feel you are one of the more interesting people in the room, de facto," Professor Quinn says.

Thinking of the discoveries possible with a telescope 50 times more sensitive than any previously built - as the SKA will be - is a fascinating thought, and not only useful for astronomers. Securing the project would inject ongoing millions into the industry and infrastructure of the state.

"As a scientist, it may come as a shock when you suddenly find yourself having to coordinate people, control budgets and resolve conflicts," Professor Quinn says.

"With government contracts you realise you are working with public money and have responsibilities outside the lab room. My role as director of the SKA project does not just involve looking into the dawn of creation. I have to hire personnel."

And as at the beginning of every project, the scope of faith must match the scope of investment. In reality, what the galaxy-crunching machine may actually find is unpredictable.

"We know what the telescope is designed to do; we know what it can do. We just don't know what it will do. We have to factor in known unknowns, unknown unknowns and unknown knowns," Professor Quinn says, paraphrasing an infamous press conference by former US defense secretary Donald Rumsfeld.

During his career, Professor Quinn's research has not only taken him to the edges of the galaxy but to a postdoctoral appointment in California as well as a decade in Munich, where he was division head of the data management and operations division at the European Southern Observatory (ESO) headquarters. The ESO is now the world's biggest observatory out-performing, out-publishing the Hubble space project. It has been a long and varied journey for a graduate from Wollongong, south of Sydney.

The greatest journeys the well-travelled professor had to make have, nonetheless, been mental ones.

"The biggest challenge is to bring astronomy to a human level," he says. "Just try to imagine - to really see - a neutron star 12 kilometres across, weighing more than our sun, spinning 30 times a second."

So what to do when you discover something inexplicable, incredible, that falls outside all known categories.

"If you have checked and double-checked and cannot place it altogether, you have to go out on a limb. Consider inventing a new law of physics," Professor Quinn says.

Now a Premier's fellow at UWA, Professor Quinn is excited about getting back to university work and interacting with the new generation of scientists.

"I believe we all have a duty to teach and pass on knowledge. You've got to look for talent, you've got to remember there is a kid out there who's really got it. It is your duty to go and find them."

Your stars for today ...

Many of the questions I deal with are at the gut of man. The interest was intrinsic and many of astronomical problems are issues that people question all of the time. Why am I here? Why is this so? How did it become so?

I had a wonderful teacher at school who was visibly excited about his subject and who relished every lesson where he could share this passion. Being with people who are excited about what they do is always stimulating. I count it a privilege that I have been lucky enough to work with some outstanding people, including Nobel Prize winners, who have excited and encouraged me in my career.

What interests you outside of work?

The problem with science guys is that we do tend to be very work-focused. Outside my research, I like computers, gadgets and movies - sci fi, of course.

What is the hardest aspect of your work?

A perpetual sense of inadequacy. Sometimes, you are just not making progress and you begin to run out of ideas. You feel you are scratching the tip of the iceberg. You question whether you are smart enough or good enough to solve the problem and begin to feel very frustrated. It can be disheartening.

What questions do you get asked at parties?

Well, there is always 'Do aliens exist?' Other times, people confuse me with an astrologer. My wife is in a different industry, and her colleagues' reactions to what I do have, at times, been interesting. "Are you really an astronomer? I'm a virgo!" and such.

Do you ever lose yourself gazing at the stars?