Marylyn New takes an unconventional approach to decision making, but it works. 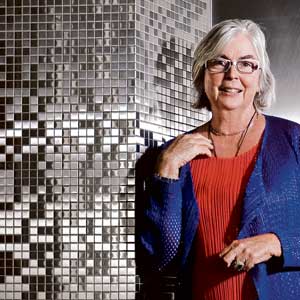 ONE of the richest women in Western Australia, The Esplanade Hotels Group owner, Marylyn New, has a unique approach to operating a business.

"I'm also managing director of a company called Icorp - Intuit Corporation, which is named in recognition of how I run my business, which is using my intuition," Ms New told WA Business News.

"I became very aware of it in 1987 when there was the big crash with shares [on October 19]. I sold all my shares the Friday at 11am before the crash on the Monday.

"Then I started to really recognise and trust my intuition. Like I bought the [Esplanade] hotel in one day; I heard about it at four o'clock on Friday and bought it on Monday, and I trusted my intuition.

"It's very interesting because with the recent difficulty we're having in the financial markets, before it happened I knew it was coming ... I had nothing on the stock market because I knew it was going to crash again.

"It's never let me down. I will say categorically it will never let you down. I make all my decisions on intuition; it's got to feel right.

"All the figures can be right or wrong, but I have a knowing and if you base it on your truth and not on your ego or some other premise like trying to please someone or some other reason, your decisions will be totally sound, for you."

That intuition led to the expansion and recent refurbishment of The Esplanade in Fremantle, which increased it business by 12 per cent last year, and to the purchase of another hotel in Como.

So what is Ms New's intuition about the future of the global economy?

"I think in the next one or two years they'll stay in the illusion that they can save it - they can't. They can't print money and save it," she says.

"Because they're not going about it the right way and the right way is very, very painful - it's recognising that we have too much debt in the world. It's not based on business principles, but we live in a material, capitalistic world.

"Nobody knows where the bottom is, so what do I think is going to happen?

"We might make it in a couple of years, we might think we might. I think after two or three years it will collapse completely and we'll have to find another way of operating in the world.

"I think it's the most exciting time to be alive. To start off with I think this collapse is going to save the planet, and [currently] we're killing the planet.

"So we had to have this happen to save the planet. How we go forward I don't know."

As a Liberal Party stalwart, developer of the Victoria Quay Apartments in Fremantle, and the first female president to be elected to the Fremantle Chamber of Commerce in its 133-year history, Ms New's intuitive formula to operating a business appears successful.

Her father and mentor Ric New and his brother Gerry founded Midland Brick Company in 1946 after a shortage of building products in Western Australia encouraged them to produce their own bricks.

In 1990 the company became a division of Boral and, in seeking a new business venture, Ms New purchased The Esplanade Hotel towards to the end of the 1991 recession.

In 2006, she was named a finalist in the Ernst & Young Entrepreneur of the Year awards, won the Rotary International Paul Harris Award in 2005, and was acknowledged in the Fremantle Business Hall of Fame in 1992.

"When I bought The Esplanade Hotel I wanted to create the best hotel in Australia, and I believe without question I have done that," Ms New said.

"It's had extraordinary growth. When something like this [economic downturn] happens I see it as just an opportunity for growth.

"Every obstacle that comes our way is put there for a reason - our personal growth."

Do you believe in women's intuition?

I think we all have a capacity; women just have it more highly developed. Men have the capacity but they often don't trust it because they don't go on feelings; we go on feelings.

How do you relieve stress?

I don't believe in stress. When something [negative] happens to me it's just an opportunity for growth. Every obstacle that comes in our way is put there for a reason - our personal growth.

What do you do in your spare time?

I like to travel, particularly to Italy, but I go to France a lot. I like the aesthetics there and I'm an aesthetics type of person.

Are you afraid of dying?

I'm not scared of death, death is just a transition into the next life - either reincarnation or wherever you go.

My father used to always say, 'always invest in yourself'.

I was advised not to sell my Poseidon shares when they were worth $245 and I had 700 of them. My former husband said 'no don't sell them you have to pay income tax on them'; I could have bought seven houses with them.

Do you take your work home with you?

Absolutely not. I won't discuss it and I won't meet anywhere or have anyone in my home to discuss business. I'm very strict about that.

Are you much of a green thumb?

Do you have a mobile phone?

I have two (laughs). I'm very bad with my phone. In fact with my new iPhone, I have to carry an extra charger for it because I usually go through two batteries in one day.

Who has been your mentor?