Keith Spence has moved on after more than three decades at Woodside, but he retains fond memories of his time at the oil and gas giant. 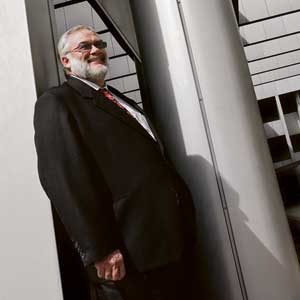 IN his 34 years at Woodside Petroleum, Keith Spence went from working as a geologist for what was a junior explorer to being a director (and briefly acting chief executive) of the country's largest oil and gas company.

Mr Spence says working with oil and gas was all he ever wanted to do.

"I've always wanted to be into the soft rocks side of it more than the mining ore side of it," Mr Spence told WA Business News.

Now, as chair of the State Training Board, he is occupied with a different set of problems - mainly concerning the state's ongoing skills crisis - and more recently, the re-skilling of returning mine workers after the resources boom slowed last year.

And if these workers are worried about their futures, they can take comfort from Mr Spence's experiences.

His career took a similarly unforeseen turn when he graduated from the University of Hobart with first class honours in geology and geophysics.

"All that Poseidon Nickel and other stuff was going on at the time and there were no jobs for geologists. So I decided to go back to uni and study for a PhD. As jobs came up I would apply for them," Mr Spence says.

As it turned out, one of the first jobs he applied for was at Woodside in Perth. He moved to Western Australia in 1974 and has been involved with the company ever since.

It gave him the opportunity to work with Woodside's shareholder company, Shell, which took him overseas from 1977, and then to Shell in Melbourne from 1984.

Mr Spence remembers the feeling of "coming home" when he came back to Perth a decade later.

"It absolutely felt like home when we came back in 1994, driving down the freeway and seeing the outline of the city," he says.

"It was a little bit different, with the Bond building and other changes, but it was like coming home and it is home.

"I like Western Australia. Perth has space, and it doesn't have that pressured feeling that some of the other places have."

Despite the current slump in the sector, which Mr Spence sees as temporary, he says mining and resources are the state's strengths, and also what set it apart.

He challenges the Dullesville stereotype of WA as a place that is lacking in opportunity and intellect.

"I think WA does pretty well; I think we punch above our weight," Mr Spence says.

"I meet a lot of people as I travel around in various roles and we stack up pretty well, quite honestly."

He believes climate change is the greatest challenge for the future of the state, and the planet.

"There are coastal communities that will suffer and for the South West, in terms of agriculture, rising temperatures and less rainfall, it's a fairly massive change that's coming at us," Mr Spence says.

"You see the size of the problem Australia has to deal with and you think, 'how do you translate that to the US, to Europe?' The problem is massive."

As well as chairing the State Training Board, a position he has held since 2005, Mr Spence is a director of engineering company Clough, and on the boards of fund manager GESB Mutual - which is being created from the planned mutualisation of the state government's super board - the Western Australian Academy of Performing Arts, Curtin University of Technology's Council and training body Skills Australia.

He remembers his time with Woodside and Shell fondly.

''I've been lucky to work with some pretty inspiring people. John Akehurst was a pretty great chief executive to work with,'' Mr Spence says.

''Don Voelte, again, totally different personality. I think when you have an opportunity to work with people they all have the ability to teach you something and you can learn from them.

"I retired on American Independence Day. I've had a bit of a chuckle with Don over that," he says.

"I wanted to retire on the first of July, which was a Monday, and I thought, 'that's a pretty average day to retire on'.

"So I retired on the fourth of July, American Independence Day, which I thought was perfect'."

What is your favourite place to travel?

I love Japan. I like the people and I have a lot of respect for the culture and traditions. For a really busy place, there's a peacefulness I really like.

If you hadn't pursued a career with Woodside, what would you have done?

I've always wanted to be a geologist and I would have found some way to get into that world. I had a rock collection when I was a kid and books about geology fascinated me.

What is your favourite holiday destination?

I love Exmouth. I've got a lot of friends there and I've been able to build lots of friendships with Woodside's involvement. It's a beautiful place to have a holiday.

What characteristics do you most value in people?