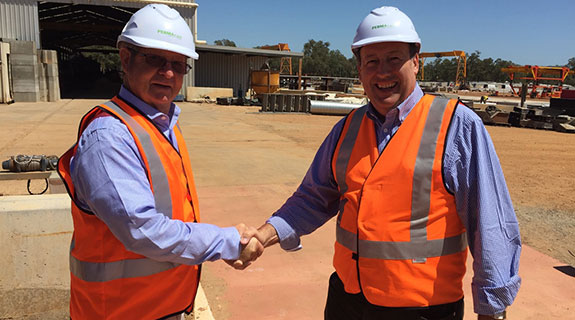 Mr Berkefeld joins Permacast as non-executive chairman after having previously served as chairman of WSN Environmental Solutions and as deputy general manager of former CIMIC Group subsidiary HWE Mining, which was acquired by BHP Billiton in 2011.

Permacast is currently building seating platforms for the new Perth Stadium under a $14 million contract with Brookfield Multiplex, and has recently completed a contract for work on the Chevron-operated Wheatstone LNG project near Onslow for Laing O’Rourke.

The company has also just commissioned a pre-stressing bed at its factory in Cardup as part of its subcontract with CIMIC subsidiary CPB Contractors for extension work on the Mitchell Freeway.

Prior to his tenure at WSN and HWE Mining, Mr Berkefeld was managing director of Brambles subsidiaries Brambles Industrial Services and Cleanaway, which were sold to KKR in 2006.

He stayed with BIS Cleanaway as managing director for a year before taking the same role at Bis Industries, until 2009.

Mr Berkefeld currently sits on the board of HSE Mining and Hiway Group NZ, and serves as an adviser and non-executive director to Wagner Group.

He replaces Mr Egerton-Warburton, who has stepped down from the Permacast board as part of his plans to retire.

In a statement, Mr Berkefeld said he had known Permacast’s owners for several years and watched the company emerge as a major player in WA’s civil contracting scene.

“There is a great young team comprising some impressive individuals at Permacast and I think what they have achieved so far is a credit to them and the owners, who have backed the business in from the outset,” Mr Berkefeld said.

“I think there is now a great opportunity for the company to establish itself as the first-choice supplier in WA for large-scale pre-cast concrete.

“The company prides itself on using engineering nous to provide cost and production time savings.”