This now-mobile group is a key driver in Perth’s reviving apartments market, making up 65 per cent of buyers. 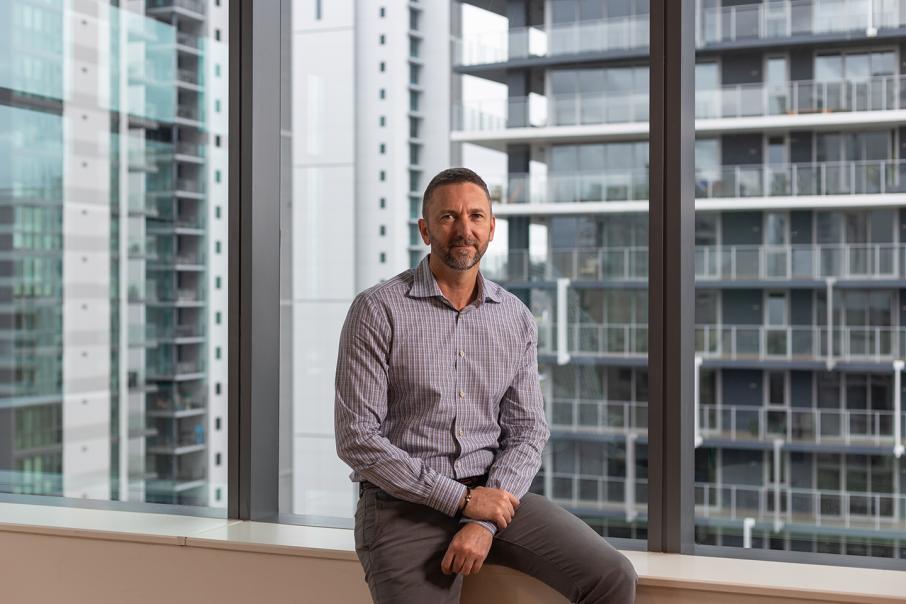 Darren Pateman says the market appears to have turned the corner into a recovery phase. Photo: Gabriel Oliveira

This now-mobile group is a key driver in Perth’s reviving apartments market, making up 65 per cent of buyers.

The successful completion of Blackburne’s Enclave apartment building in East Perth, with buyers happy to settle and banks satisfied with the valuations, has raised hopes the Perth apartments market is ready to improve.

Blackburne managing director Paul Blackburne said 80 per cent of the project settled in the past month and, even as builder Jaxon was completing construction, sales averaged close to one apartment a week.

The completed 12-storey apartment building was available to people on Blackburne’s database last weekend, and will open to the public at the weekend as the group progresses sales of the remaining apartments.

Mr Blackburne said the project was launched in a challenging market last year.

“It was a very tough market, so we increased the quality, lowered the price and made the apartments larger,” Mr Blackburne said.

According to the latest Urbis Apartment Essentials survey, the return of owner-occupiers is a key driver of the Perth apartment market, making up around 65 per cent of buyers.

Urbis director property economics and research David Cresp said: “This is the highest proportion of owner occupiers that we have recorded since the survey started in 2014.

“Whilst the market for apartment developers remains challenging, well-targeted developments continue to perform.

“Perth buyers are currently spoilt for choice with a range of apartments in new developments available across Perth.

“However, as the property market improves, the number of options and good buying opportunities will decrease for buyers and now is certainly the time to make the most of a buyers’ market.

Mr Blackburne said the larger apartments at Enclave appealed to owner-occupiers and people looking to down-size from their family home.

“People buying off the plan are very cautious – we have moved more towards the premium end of the market and that has worked well for us,” Mr Blackburne said.

“Our primary customers vary project to project, but for most of them the primary market is from downsizers whose kids have left home.

“That would represent more than 60 per cent of our buyers.

“The current restrictions on finance and lending don’t really affect them because they are not borrowing to buy, they are selling their home for more than they are spending to buy the apartment and then using that cash to save for retirement.

“The fastest-growing market is families – it still only represents 5 per cent to 10 per cent of buyers but is growing fast – they want to live close to amenity.

“We are doing larger apartments with higher-quality and more common facilities and the prices have come down so they are much more affordable.” 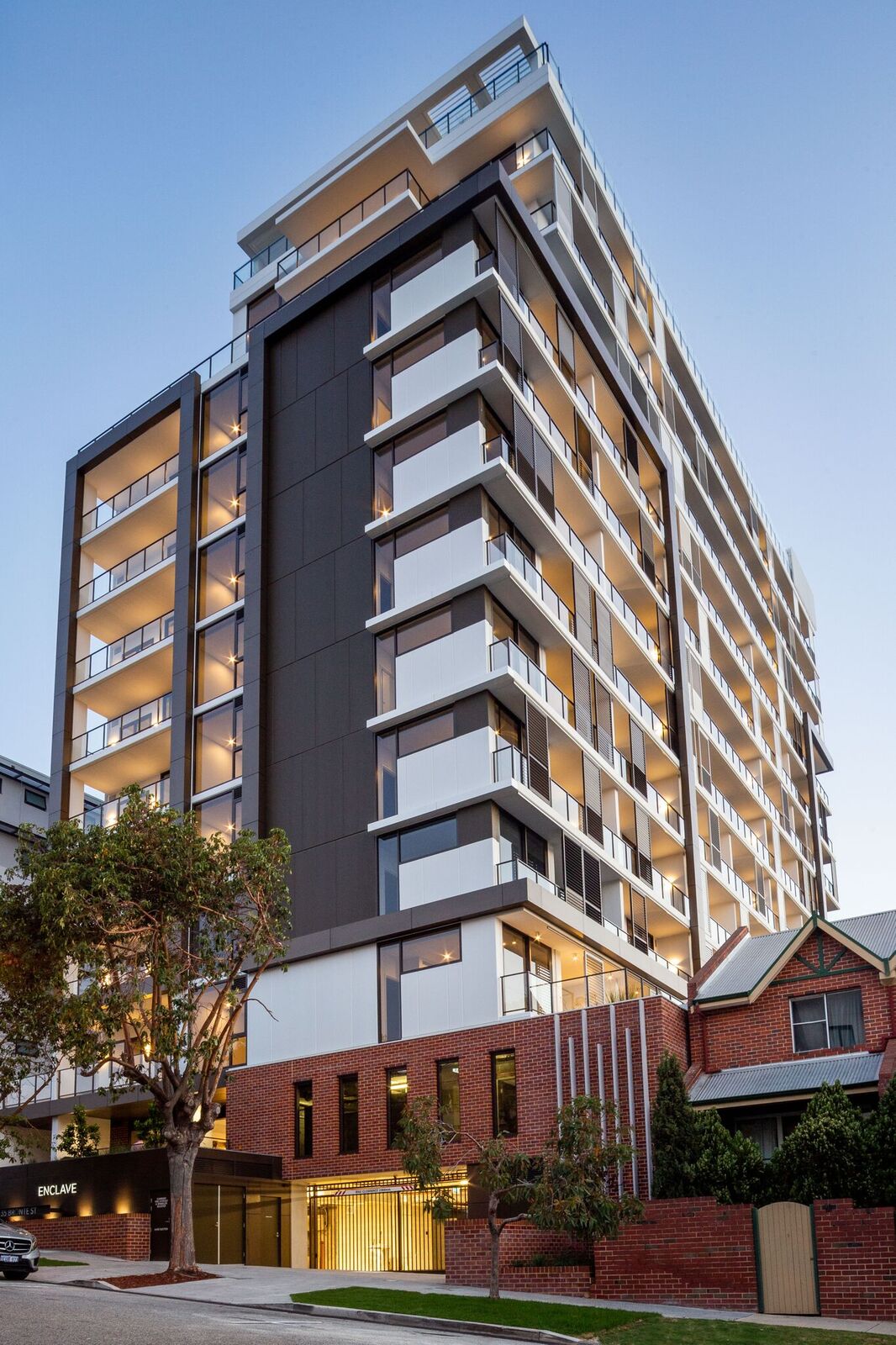 Mr Blackburne said the shifting demographics of the typical buyer, had led the group to spend up to $2 million on common facilities at its recent developments and to adjust its product mix.

Major apartment developer Finbar Group has also moved to adjust its product mix to meet the market, with an example at the second stage of its Maylands development launched for sale last weekend.

Finbar revised its plans in response to market conditions, reducing the height from 10 to three storeys.

The expanded footprint will see the plan extended to include a further 120 one-, two- and three-bedroom, three-storey walk-up apartments as well as three commercial units with basement parking.

Finbar managing director Darren Pateman said sales activity during the course of the year indicated the market had turned the corner into a recovery phase but that progress in the WA market was likely to be slow and steady.

Unison on Tenth, the Maylands development’s first stage, which consisted of 167 one-, two- and three-bedroom apartments, has sold out.

Mr Pateman agreed that the mix of buyers of Perth’s apartments had changed.

“Even as recently as five years ago, apartments were very much a second choice,” Mr Pateman said.

“It was people who needed to be close to work or it was a primary choice for investment just because it’s an easier asset to manage.

“Now people who would ordinarily have a family home are very comfortable living in a nice apartment.

“Market activity in the first homebuyers’ sector is leading the recovery in the Perth property market and I think Maylands, like our Palmyra Apartments development, will benefit from its strategic positioning within that market.”

Finbar’s development at Palmyra is another example of shifting attitudes.

Mr Pateman estimates 90 per cent of customers at Palmyra, a three-storey walk-up building where a one-bedroom apartment costs from $270,000, are Gen-Y children with baby boomer parents from the immediate surrounding suburbs, who may help with deposit or loan guarantees.

“They don’t want to see their kids shift an hour away, so they are helping them get into the suburb,” Mr Pateman said.

“That has influenced us in a couple of our other developments, so we are doing a few tweaks to ensure we continue to suit that market.”

Mr Pateman and Mr Blackburne agree that the investor market for residential apartments is beginning to turn positive, although it remains well down from its peak.

“In a normal market, about 50 per cent of our demand is from the investor market, now it is about 15 to 20 per cent,” Mr Pateman said.

“Around December 2017, there were literally no investor buyers, it was purely an owner-occupier market.

“Instead of marketing pre-sales for 18 months, that becomes more like a six-month process before you can actually start building the project.”

Mr Blackburne said investors accounted for around 10 per cent to 20 per cent of purchasers, although he was seeing signs that sophisticated investors were returning to the market signalling that Perth was now at the bottom of the cycle.

“The other reason investors are coming back is rents have started going up a little bit for higher-quality apartments,” Mr Blackburne said.

“Rental yields for our higher-end apartments are averaging 4.8 per cent, which is 30 per cent higher than Sydney or Melbourne.

“Perth has the strongest market in Australia in terms of rental yield.”

It has approval for 290 apartments at the old Subiaco markets site and plans to develop 200 apartments in two stages in Karrinyup.

Another major project that will provide a measure of the residential apartment sector’s strength is the first release at Far East Consortium’s Perth Hub, a master-planned precinct within Perth City Link.

The first release incorporates a 30-storey apartment building and the 23-room Dorsett Hotel.

PRDnationwide will start pre-selling apartments off the plan on October 31.

Finbar is also working on a development application for its Civic project in South Perth, which is going through a town planning scheme amendment that is specific to the site.

Mr Pateman said consideration of the project was with the WA Planning Commission and he was hopeful the development could get approval to allow marketing in 2019.

“If it is supported and it gets before the minister in time, we hope to have it gazetted this year,” he said.