Eric Ripper has plenty of credibility on economic matters, so the issues raised in his final address to parliament are worth paying attention to. 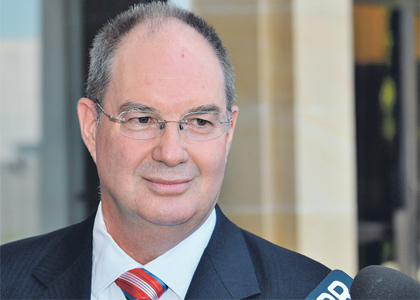 Eric Ripper has plenty of credibility on economic matters, so the issues raised in his final address to parliament are worth paying attention to.

FORMER Labor Party leader Eric Ripper has painted a bleak outlook for Western Australia’s revenue raising capacity, predicting that more government assets will be sold off to help balance the books, regardless of which party is in power.

He says money is so tight that selling assets is likely to be the only way for the next government to fund essential capital works projects.

“In my view the infrastructure demands of this state, combined with the debt levels that are already forecast, will lead inevitably to debate about privatisation,” Mr Ripper said.

“The privatisation of Verve and Fremantle Ports will surely come onto the agenda during the next parliamentary term. Someone is going to advance the proposition that those entities should be sold and the monies put towards infrastructure investment.”

Mr Ripper gave the warning in his final address to state parliament after a political career that started in 1988. Although he was deposed as Labor leader earlier this year, his record as treasurer represents a strong case for him to be recognised as the most successful manager of the financial books since federation.

Mr Ripper delivered eight surplus budgets during the Labor governments led by Geoff Gallop, and then Alan Carpenter, including billion dollar-plus surpluses during the days of the ‘turbo-charged’ economy. Ten taxes were abolished to help accommodate the GST agreement signed by Richard Court’s government, and state debt in 2008 (when Labor lost power) was $900 million less than in 2001 when it took over.

In his final address to the Legislative Assembly before his retirement at the next election, Mr Ripper said he was “dismayed” at the state of the finances. Such a comment might not come as a surprise when your opponents are in power, but his reasons for pessimism are cause for concern.

The fonner Labor leader accused the Liberal-National government of “using every accounting trick and savings device one could conceive of’ to make the cunent budget look good.

He said two things were essential to improve WA’s financial position. The first was the development of an ‘intellectual defence’ of federalism. Too often national reformers thought unifonnity was a reform, and that federalism itself was an obstacle.

The second was the redistribution of money generated by the GST, because growth in the tax had been checked by the reaction to the GFC.

“We are going to have some very significant financial issues. I do not see a repeat of the stamp duty boom of my time, or the royalties boom of this government.

“I see health and police spending growing much faster than revenue, so the state will be driven back to our own tax base - the three ugly sisters of payroll tax, land tax and stamp duty. They are all ugly, but the ugliest is stamp duty because of its impact on the efficient utilisation of our housing stock and its inhibiting effect upon people moving to where the work is.

“There is merit in the proposed trade-off between stamp duty and land tax, by which stamp duty would be phased down and land tax would be broadened to be a universal tax and increased, but it would be a very difficult refonn to implement.”

The fonner deputy premier noted that the two desalination plants helped secure metropolitan water supplies, but their water was 15 per cent dearer than recycled water.

Strong leadership was essential if the public was to accept recycled water, and the private sector should be given access to the market as part of the push to contain charges.

Mr Ripper also drove the native title issue in government, and called for all outstanding cases to be resolved by 2022, the 30th anniversary of the High Court’s Mabo decision.

The voters will decide the fates of the remaining 50 MLAs.

DON’T look too hard for the letters ‘ALP’ against the name of the Labor candidates on ballot papers for next March’s state election; you won’t find them.

Instead you will see the words ‘ WA Labor’ for the first time, if the party has its way. It’s part of a new marketing ploy Labor hopes will strike a chord with voters and improve the party’s chances in what is shaping as a tough election campaign.

The state branch has applied to the WA Electoral Commission to register the change.

The commission has advertised the party’s intention and, if there are no serious objections, expects to give the green light in good time for the poll.

Labor has been using the tag WA Labor for several years and the logo is being employed increasingly on MPs’ statements and campaign advertising.

The break from more than 100 years of tradition coincides with an increased feeling within some sections of the party that senior federal MPs are unsympathetic to the special needs of the party in WA.

They believe some initiatives, such as the new mining tax, have been framed without due consideration of the electoral consequences in the west.

WA members have also been alanned at the low level of support locally for both the federal government and the prime minister, Julia Gillard. State leader Mark McGowan even said that Ms Gillard would not be invited to join the party’s campaign, adding that it would be fought purely on state issues.

However recent polling has indicated that the party’s federal stocks have been improving. If this continues there could well be moves to involve the prime minister as the ALP fights to maximise its vote under the new banner.