Outback icon coming to the city

One of Australia’s most-recognisable hospitality operators is expanding west, with up to three Ettamogah-branded venues in the works in Western Australia. 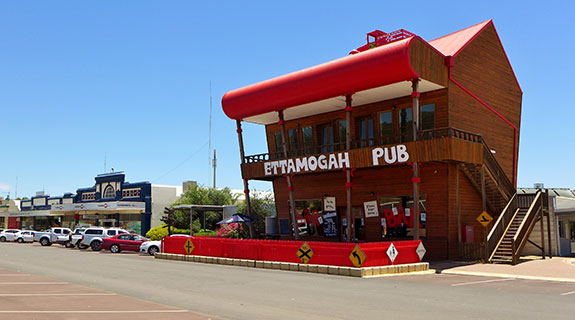 EYE-CATCHING: The Ettamogah Pub in Cunderdin is a treat for travellers along the Great Eastern Highway. Photo: Wikimedia Commons

One of Australia’s most-recognisable hospitality operators is expanding west, with up to three Ettamogah-branded venues in the works in Western Australia.

The Ettamogah Pub has been something of an Australian cultural icon for decades, having first featured in cartoons by Ken Maynard that appeared in the now-defunct Australasian Post magazine.

The first pub was built in Albury, NSW, in 1987, mirroring the unique architecture that was drawn in the cartoons.

Three other venues have since popped up around Australia – one in Sydney’s Rouse Hill, another on the Sunshine Coast, and an Ettamogah Pub that was built in the heart of WA’s Wheatbelt, in Cunderdin, in 2001.

Ettamogah Group managing director Leigh O’Brien, who purchased the Ettamogah rights in 1994, has big plans to expand his empire, including hotels and restaurants as well as more venues showcasing the eye-catching Ettamogah Pub architecture.

Mr O’Brien said he was finalising negotiations for a new Ettamogah Pub in Geelong, Victoria, and an Ettamogah Bar and Grill in Sydney, while planning for another two venues in Queensland was also well-advanced.

In WA, Mr O’Brien told Business News he had his sights on opening three new venues in the next three years, the first of which would likely be in the Swan Valley.

“The potential out there is unbelievable,” Mr O’Brien said.

“We could be doing a couple of places out there, we’re looking at doing what we call an Ettamogah Trip Hotel, in conjunction with the Wyndham Group, that is themed around our characters and we want to work with the locals out there on some Aboriginal artworks.”

The Swan Valley venue is also proposed to be attractive to locals, with Mr O’Brien flagging the possibility of building a wave pool and a host of retailers once the hotel and pub are established.

Mr O’Brien said he was also keen to partner with WA producers, with discussions ongoing with Swan Valley wineries and breweries to showcase their wares in his pubs and restaurants.

“When we go into each area, that’s what we look for, to work with the locals,” he said.

“We’re already talking to some wineries, to work closely with us and our own brand, and we have to go back into manufacturing our own Ettamogah beer.

“There are a couple of breweries we’ve been talking to and we’re very keen to work with.”

Mr O’Brien said he saw massive potential in Perth as a tourism destination, with the Ettamogah brand to be a big draw for international visitors.

“Mandurah is another area that I’m very keen on, we’ve been having discussions down there, and there are also a couple of sites in the city,” he said.