A unique mobile service for homeless people will benefit from a recent injection of funding. 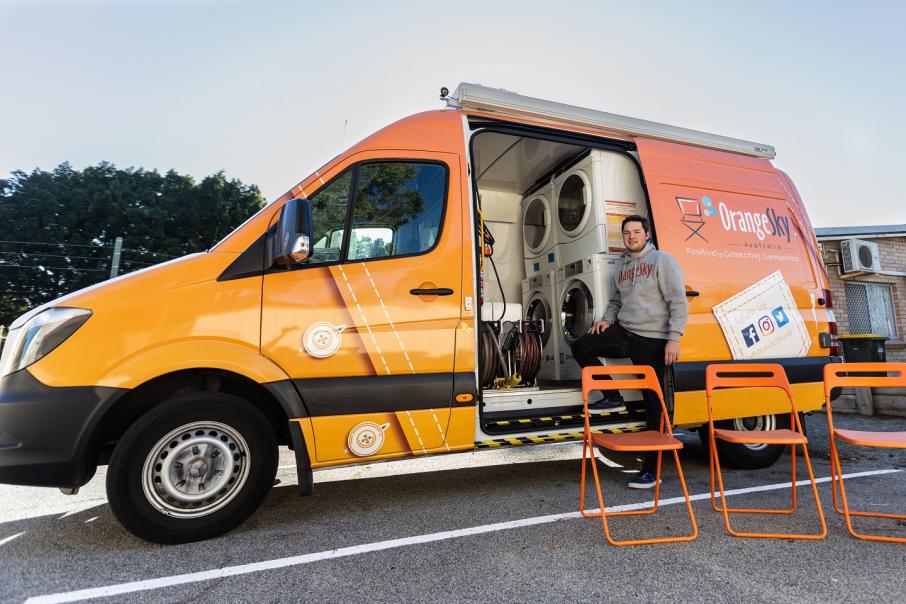 Louis Beukes says the funding will have a much bigger effect on individuals than just washing their clothes and giving them a shower. Photo: Gabriel Oliveira

A unique mobile service for homeless people will benefit from a recent injection of funding.

A recent sponsorship by Woodside Petroleum has extended the operational life of not-for-profit business Orange Sky in Perth.

The business started five years ago, when Brisbane friends Nic Marchesi and Lucas Patchett put two washers and two dryers in the back of a van and offered to wash the clothes of that city’s homeless for free.

Orange Sky recently caught the attention of Woodside, which approached the team and agreed to sponsor a van in Perth with a commitment of $450,000 over the next three years.

Mr Patchett, who is chairman of Orange Sky, said the not for profit had been considering a review of its Perth operations due to a lack of funding.

Woodside CEO Peter Coleman said the company was proud to collaborate with Orange Sky and named the van ‘Karla’, the Noongar word meaning ‘camp fire’ because that was a place where people gathered to connect with each other.

Karla is in action 11 times a week and visits Fremantle, Rockingham, Mandurah and Kwinana.

Orange Sky Perth south service leader Louis Beukes said the funding would have a much bigger effect on individuals than just washing their clothes and giving them a shower, highlighting the social and emotional aspects the program provided.

“No-one may talk to them for weeks on end because they are alone; they might be living somewhere which doesn’t have a specific address,” he said.

“That’s where our six chairs come in.

“Each van has six chairs and each represents an opportunity for people to sit down and make a connection with one of our volunteers who is likely from the same area … and might not otherwise connect on a day-to-day basis.

“It’s very important to them as well.”

Mr Patchett said the conversational element of the service was a by-product of the original idea of washing people’s clothes.

“We started with the intention of just improving hygiene standards for people on the streets, but this quickly evolved into something a lot more than that, which is around the conversations and that connection and realising the importance of those orange chairs,” he said.

The idea has proved popular with the community, corporate organisations and philanthropists, with a third of donations coming from each source.

Mr Patchett said the increase in revenue had snowballed as Orange Sky bought more vans and more people heard about what it offered.

“That’s actually engaged more and more communities in the work that we do and [them] wanting to come and support us further,” he said.

The organisation launched its first big promotional campaign at the start of this year. Called the Sudsy Challenge, it required people to wear the same clothes for three days.

“We had about 2,400 people sign up to do it from all over Australia,” Mr Patchett said.

“They received their shirts and wore the same clothes for three days. The purpose was to raise funds but also to start conversations.”

The team plans to make the challenge bigger next year.

“It’s about finding ways for anyone to come and support us, Mr Patchett said.

“If that’s a school, if that’s a local community club or if that’s a larger group like Woodside, it’s about having lots of different ways for people to come and support us and feel connected to what we do because those stories and those impacts and statistics are really what will drive people to keep supporting us.”

For Orange Sky to be a sustainable business, Mr Patchett said, it needed to look at how to survive in tough times.

“Not for profit implies there is zero profit, but actually a surplus in a not for profit is a really positive thing and that’s what we try get through to as well,” he said.