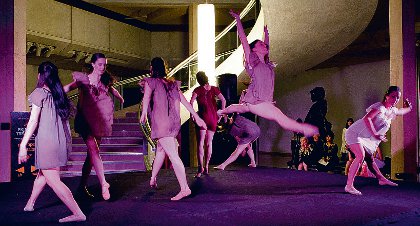 HE may never have danced professionally, but Jeremy Phillips is passionate enough about contemporary dance to have started a dance company with a funding model he hopes will bring a full season of work in 2012.

Visual Dance was started in 2008, driven by Mr Phillips’ recognition that dancers trained in Perth had few options after completing their studies – leave Perth to chase opportunities interstate or overseas, or bow out of dancing altogether.

He saw first-hand the creative drain from WA to the eastern states or international destinations when working as a graphic designer to support the WA Academy of Performing Arts.

“It became really upsetting to go and see their final end-of-year show, see how brilliant they had become and knowing for a lot of them it would be the last time they were going to be on a stage,” Mr Phillips said.

“As a dance fan who would love to be able to go and see more on stage in Perth, it is incredibly frustrating; it is a horrible waste. The lack of engagement, appreciation and use of young artistic talent is something that has always been an issue I really care about.

“It seemed like a very acute example of it, having 30 young dancers graduating from the top academy in the country and not having the support to do anything with their skills and ending up selling dresses or teaching pilates and whatever else.”

For Mr Phillips the answer was to develop a dance company that would allow young dancers to use their skills on an ongoing basis. His long-term vision for the business involved developing ongoing and post-graduate training opportunities for young dancers.

The business has so far been self-funded, with Mr Phillips’ commitment to Visible Dance showing through in his web development work, which predominantly funds the organisation.

Mr Phillips launched ArtsPowered in early October and developed a model where businesses become members of ArtsPowered at what he calls a low monthly fee.

“Because Visible Dance is a very unconventional arts organisation, particularly for a dance organisation, it doesn’t fit the mould of what gets funded by government or large corporations,” Mr Phillips said.

“The people who really get enthusiastic about Visible Dance are local businesses which tend to be small-to-medium companies, which aren’t the businesses that can afford to put thousands of dollars towards an arts organisation.

“The concept of ArtsPowered creates a realistic mechanism for those small businesses to be supportive of Visible Dance in a way that we are able to return value to them.

“It allows us to use that grass roots, community based support.”

ArtsPowered currently has six members and Mr Phillips hopes this will grow to 40 by the beginning of 2012, but said the program was already having financial benefits for the organisation.

He has planned a 20-week season for next year with six productions across that time, and hopes to employ dancers on a part-time or full-time basis.

With six contemporary dance events in Visible Dance’s portfolio, Mr Phillips moved to establish an avenue for classically trained dancers to coincide with the launch of ArtsPowered – an annual event entitled Nyssa.

Nyssa is a dance performance-cum-fashion show-cum-cocktail-party that aims to offer classical dancers another avenue for work and to open up classical dance to younger audiences.

“A lot of what Visible Dance does is not about changing the art form at all, it is about delivering it in a way that is accessible for young audiences,” Mr Phillips said.