Two local enterprises have joined forces to leverage off each other’s niche offerings amid a declining resources sector and limited growth opportunities for indigenous businesses. 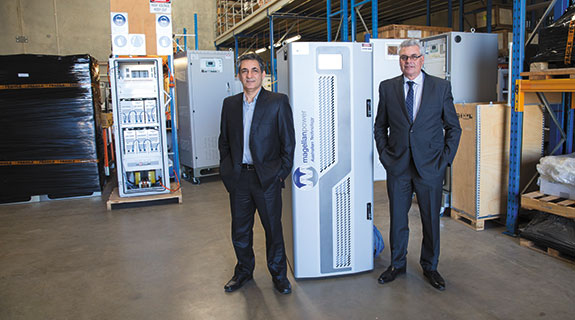 Two local enterprises have joined forces to leverage off each other’s niche offerings amid a declining resources sector and limited growth opportunities for indigenous businesses.

Magellan Power and Australian Indigenous Enterprises have reacted to the unfavourable conditions by identifying new possibilities for their services.

Of particular concern to Magellan Power managing director Masoud Abshar has been the lack of response from state government-controlled utilities sector to the company’s scalable battery storage system.

“I think the (WA) market is good, it just needs political will to use equipment like this. For example, Western Power is very slow in picking up technology like this because it is disruptive, Mr Abshar told Business News.

“It is very frustrating because we can see the benefits so clearly.”

Magellan’s focus in recent years has been the creation of lightweight, affordable battery storage devices that can be used in homes, businesses and industrial estates in need of backup power for their renewable energy sources.

While Magellan buys off-the-shelf lithium batteries, it claims to be one of only a few manufacturers in the world to have developed its own scalable battery storage system, which stores power to be used when intermittent wind or solar power drops off, providing a smooth, uninterrupted backup system for on or off-grid use.

For $15,000, residential developers can buy a fridge-sized device that can power three homes (10 kilowatt hours), while big commercial users can buy systems capable of providing up to one-megawatt hour of power for about $1 million.

In response to the lack of interest, Magellan has begun promoting its product in more receptive markets in India and the UK, but it is keen to focus on market opportunities in Western Australia.

To this end it has partnered with Australian Indigenous Enterprises, which plans to develop affordable modular housing in remote regions equipped with renewable energy and battery storage.

“It was just sensible to find a way to diversify, and not rely wholly on mining; but having said that there’s a great opportunity for renewable energy in the mines.

“Mining is looking for savings, right now they need savings. This is a saving, and it keeps people in work.”