A local tech company has joined many others aiming to shake up the residential property sector. 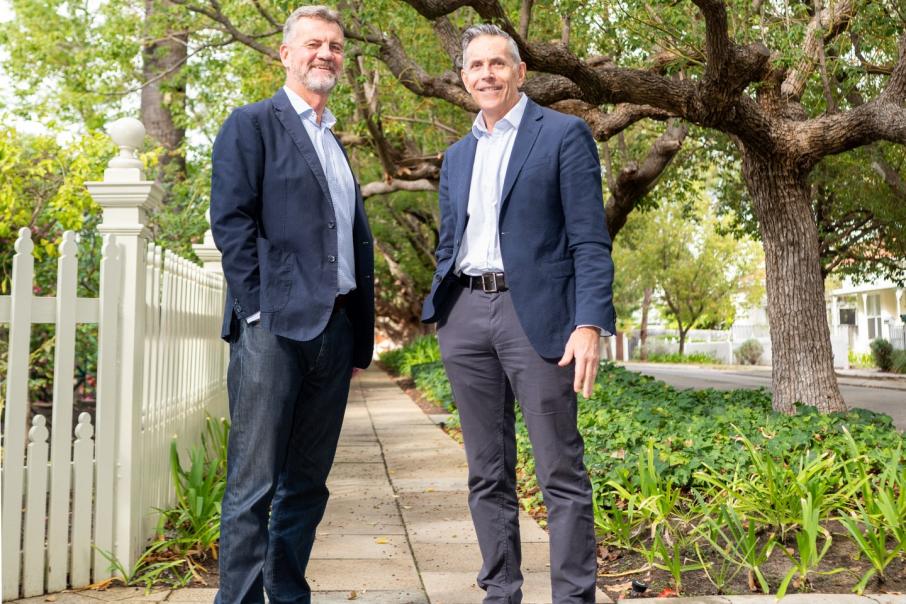 Openn Negotiation was established in 2016, with the first property listed on its platform in April 2017.

Since then, about $2 billion worth of property has been sold through the platform, 3,300 real estate agents have become certified to use it (see graph), and there are plans to expand interstate and overseas. 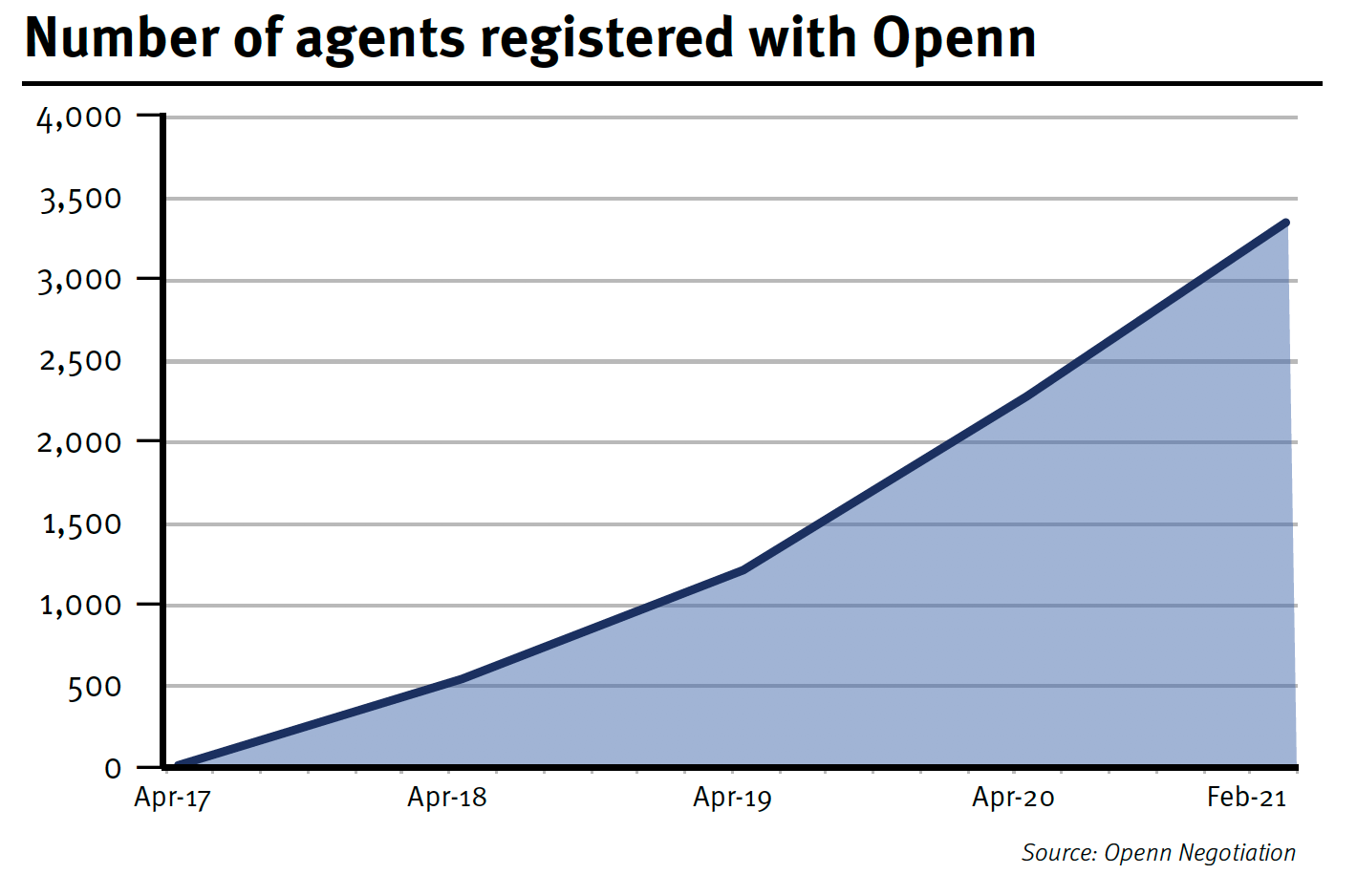 To support that growth, Openn Negotiation has lodged a prospectus to raise $9 million ahead of a listing on the ASX.

Mr Glover was frustrated by the failure of auctions to gain traction in Western Australia’s residential property market.

He was also frustrated by the lack of transparency in the traditional private treaty sales method.

“Under a normal for sale method, an agent cannot tell buyer A what buyer B is offering, and vice versa,” Mr Glover told Business News.

“There is no method for a buyer to validate that another offer exists, or what it is.”

Mr Glover said the shortcomings of the current system often emerged after a sale had been finalised.

“The agent will always call the other buyers and you can almost guarantee one of the losers will say, ‘If I’d know that was the price, we would have offered more’,” he said.

“That always left me uncomfortable, that perhaps the agent hadn’t done their job in extracting the best possible price from the market.

“The buyer who missed out is left feeling a bit jaded, and if the seller knew the truth, I’m sure they would be frustrated as well.

“And it’s not actually the agent’s fault; these are the rules that are forced on agents worldwide under the traditional private treaty method.”

Not all agents share this concern, especially in a hot market.

The lack of transparency can encourage buyers to offer a high price, to the benefit of the vendor.

However, the team at Openn Negotiation believe they have come up with a better system.

Their platform has elements of private treaty but with greater transparency, in what is effectively a managed online auction.

Openn is by no means alone in using technology to try and change the traditional real estate sector.

A report by consulting group Frost & Sullivan, included in Openn’s prospectus, estimated there are 265 proptech companies operating in Australia.

About 60 per cent operate in the residential segment, with one-fifth of these providing applications that support the sale of residential properties.

Frost & Sullivan said proptech applications had been driven by several factors, including high levels of mobile internet usage, the competitive nature of the sector, and a desire to automate aspects of property sales and management.

The consulting firm has put Openn in the category of sales management applications, which includes groups such as Market Buy and FinalCall.

“I think we will see a lot more of these online products.”

Despite the growth of proptech firms, Frost & Sullivan noted that the structure of the industry in Australia had been little affected.

The traditional model of individual agents working from local offices and selling property via private treaty or on-site auctions (on the east coast) remained dominant.

Companies with a disruptive business model have had little success.

UK-based Purplebricks, for instance, which offered a hybrid online model, withdrew from the Australian market after gaining less than 1 per cent market share over three years.

In this regard, Mr Gibbons emphasised that Openn did not seek to displace real estate agents.

“We made a conscious decision to keep agents central to the sales process,” he said.

Agents need to sign up and complete a training course before they are able to use Openn.

Their clients need to agree to use Openn for the sale of their property. That comes with a fee of $500 plus GST.

When that is done, bidders are required to sign a contract to participate in the sales process, which normally runs over several weeks and culminates in the online auction.

The bidders can include conditional bidders, who are normally excluded from auctions.

Mr Gibbons said the Openn sales process was very different from an open auction site such as eBay.

“The agent is in control and needs to vet all the bidders,” he said.

The main selling point for agents was that Openn could deliver a more efficient, automated sales process.

He said it normally took up to an hour to write-up an offer and collect a buyer’s terms and conditions.

That now took a matter of minutes, with bidders entering their details into the system.

“With DocuSign living within the app, that means once the seller and the agent are happy with the terms, at the press of a button the contract goes across to the buyer and they can sign it on their phone,” Mr Glover said.

“That can happen from anywhere in the world.”

He said there would come a time when digital contracting allowed agents to become paperless.

“If I look out the back of my office right now, I’ve got dozens of those archive boxes with 10 years’ worth of property files in them.

“All that information lives within the Openn Negotiation ecosystem: the contracts, the terms, the listing agreements, the invoices.

“Everything that an auditor needs to see annually.

“The great thing I can see is that all those files will be shreddable.”

Mr Gibbons said Openn had morphed into much more than a transactional platform.

“We see ourselves as a data company,” he said.

“The lightbulb moment was seeing the quality of data and the depth of data.

“You can see every bid, every bidder, the number of times each person has bid, the price increments per bid.

“That gives us capacity to start building lead indicators not seen before.”

To monetise that opportunity, Openn needed to be statistically relevant.

“For us now, it’s all about scale,” Mr Glover said.

Openn has raised $7.6 million from investors so far and is looking for a further $9 million through its IPO.

Ahead of its IPO, the company bolstered its board with the recruitment of Wayne Zekulich as chairman and Danielle Lee as a non-executive director.

Mr Zekulich was introduced to Openn four months ago and was attracted by its potential.

Openn has signed up Euroz Hartleys as lead manager and underwriter for its IPO.

Mr Gibbons said the IPO proceeds would be used to enhance its technology and raise awareness of the platform.

He said Openn had achieved increasingly rapid growth over the past year.

The number of certified agents has grown to more than 3,300, about 10 per cent of the total number across Australia.