One-for-one donations a cushion for charity

A Perth entrepreneur has followed in the footsteps of Toms Shoes and Zambrero, with a one-for-one proposal to benefit children’s charity, The Smith Family. 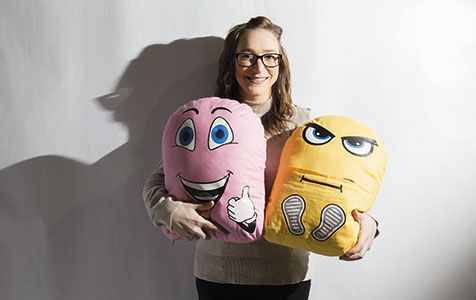 COMFORT: Victoria Khoury is using the popularity of her ‘Moody Dude’ cushions to benefit a children’s charity. Photo: Attila Csaszar

A Perth entrepreneur has followed in the footsteps of Toms Shoes and Zambrero, with a one-for-one proposal to benefit children’s charity, The Smith Family.

Victoria Khoury has launched a campaign where she will donate one of her ‘Moody Dude’ character cushions to the charity for every one sold through a crowd-funding campaign.

The strategy is similar to Californian company Toms Shoes, which was the source of Ms Khoury’s inspiration. Toms donates one pair of shoes to a child in need for every pair sold.

Mexican food franchise Zambrero, founded by Australian doctor Sam Prince, provides support to international charities to enable the provision of one plate of food to children in the developing world for every plate sold at its restaurants.

It’s understood that Ms Khoury’s campaign on the crowd-funding website Kickstarter is the first to combine a creative business venture with a philanthropic cause.

The Smith Family was founded in 1922 with a view of helping disadvantaged children in Australia. Last year its programs supported more than 112,000 children.

The Moody Dude cushions have been produced since 2011, but Ms Khoury said it was always her intention to do something more than simply sell the cushions.

“We knew that Moody Dudes were universally popular with kids, and from day one my goal has been to give them away to be loved,” she said.

Ms Khoury has set an initial production run of 300 cushions, but said that would be expanded if demand required.

She has already been approached by another not-for-profit organisation, Activ Foundation, WA’s largest, which is interested in buying her cushions to be used as an educational or emotional support tool.