Those who predicted the death of traditional media may have cast their votes too early. 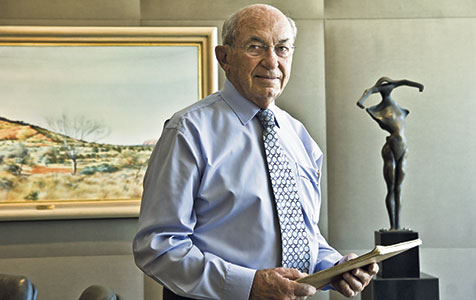 STRATEGY: While much of Stan Perron’s wealth comes from his sale of Toyota vehicles, he continues to invest in shopping centres.

Shopping centres and old media, such as newspapers, are not high on the priority list of most investors thanks to the rise of the internet, but they are high on the list of some of the world’s richest people.

In Australia, two of the best examples of people taking an opposite view to popular investment theory are Frank Lowy and Stan Perron, a pair of billionaires who rank as the second and 14th richest people in the country.

Not only have they made a large proportion of their fortunes through shopping centre ownership, they continue to invest in that model despite the effect the internet selling is having on the retail sector.

Mr Perron’s fortune grew by close to $300 million last year, thanks his unique combination of generating cash from the sale of Toyota vehicles and using the profits to buy more shopping centres.

The accounts of his Perron Investments for the June 30 year show a 73 per cent increase in profit to $285 million, while total equity in the business (assets minus liabilities) rose from $1.71 billion to $1.99 billion. The bulk of the assets come in the form of shopping centres, of which Mr Perron is in the market to buy more.

Mr Lowy hasn’t done as well recently thanks to a fall in the share price of his Westfield Group, but the share price slide exaggerates a strong underlying financial performance of the company’s shopping centres and a 3 per cent increase in dividend in the latest half-year.

What Mr Lowy and Mr Perron appear to have identified is that traditional retail will ultimately overcome the challenge presented by start-ups with a web-only offering – thanks to the double-barrelled ‘bricks and clicks’ sales technique, which empowers the customers to buy (and return) when and where they choose.

A snapshot of how bricks and clicks has matured as a selling tool can be found in the latest catalogue of the Woolworths drinks subsidiary, Dan Murphy’s, which lists what’s on offer and invites readers to either visit a store, or to ‘snap’ a photograph of certain specials in the catalogue, then use the shop’s app to be directed to a website where more products can be viewed, and bought.

Jeff Bezos, the $30 billion man behind the online retail giant Amazon, surprised the market earlier this year when he bought one of the world’s best-known old-media tittles, The Washington Post, for $US250 million, a fraction of what it was once worth.

Another American billionaire and owner of the Boston Red Sox baseball team, John Henry, decided to join the shift back to old media when he paid $US70 million for the The Boston Globe newspaper.

Without looking too closely at particular investments, or whether the new entrants are simply buying because an asset is seen as cheap after a plunge in value, there is a pattern in the way some rich people are able to spot investment trends before others, and to stick with their preferred means of investment when others are selling.

Mr Perron’s search for more shopping centres, and the purchase of The Washington Post by Mr Bezos are probably the most interesting contrarian investment moves, given the widely held view that the internet will eventually crush retail and old media.

In fact the opposite is happening, with the internet slowly being recognised as just another way to sell things, as can be seen in the Dan Murphy’s catalogue, which is very much old (albeit glossy) media that reaches most homes in Australia and then invites the reader to shop in person, or use their smart-phone.

Several years ago, to his amusement and annoyance, Mr Perron discovered that he was not getting his share of the famous ‘Hanwright’ royalty, which Rio Tinto subsidiary, Hamersley Iron, pays to Australia’s richest person, Gina Rinehart, and descendants of the late Peter Wright.

A legal tussle followed, which Mr Perron won, with the primary royalty recipients agreeing to settle for overlooked past payments and to make regular payments in the future.

Because so much money flows out the royalty scheme – more than $400 million this year alone – it was widely assumed that Mr Perron’s share would be reasonably substantial.

Not so. It seems that the royalty slice only covers some of Hamersley’s mines, and mainly the older ones.

In the latest Perron Investment accounts, a line entry reveals “iron ore royalty income” of $1.67 million, a tiny fraction of the company’s overall revenue of $485 million but an interesting reminder of why it’s a good idea to keep track of your investments.

THE provision of services to Chinese tourists is an emerging investment theme that could well be worth following if the Australian dollar continues to slip lower.

Often overlooked because of the language and cultural barrier, the trickle of Chinese taking a holiday in Australia, or studying here, is starting to take on the appearance of a flood.

More interesting than the head count is the dollar count, because according to Deutsche Bank the average Chinese visitor spends almost double the amount spent by the next biggest foreign visitor, British passport holders.

By 2017, the bank reckons inbound Chinese visitors (tourists and students) will represent the biggest single market passing through Australian airports, prompting an investment recommendation: buy Sydney Airport, a stock that has risen by 33 per cent this year from around $3 to $4 thanks its natural monopoly of the biggest aviation gateway in the country.

THE search for scapegoats by senior management at Qantas Airways for the company’s diminishing market share and falling profits has now stretched to blaming foreigners for poaching travellers into and out of Australia.

At some point, institutional investors will deliver a message to the Qantas board that the business model being pursued by management is broken and that what travellers want is good service; and right now the offering from rival carriers is superior, which is why business is in decline.