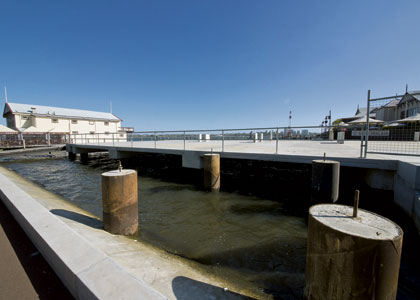 PROPOSAL: The Perth Waterfront Hotel will sit on a site constructed for a hotel initially proposed in 2000. Photo: Bohdan Warchomij

NEW plans have surfaced for a ‘floating’ hotel on the Swan River, 13 years after the original idea was proposed.

Old Perth Port, the company that owns the Lucky Shag Waterfront Bar and surrounding jetty, has lodged a development application for an 11-storey hotel on the Swan.

The proposed development is the first for the Elizabeth Quay precinct and would sit between the Barrack Street Jetty and WA Rowing Club building, on a concrete platform constructed in 2004 as part of earlier plans to build a hotel.

The application lodged with the Metropolitan Redevelopment Authority and the Swan River Trust proposes a 10-storey hotel comprising 230 rooms with a mezzanine and roof terrace.

In addition it will have a pool, two bars and space for four retail food and beverage tenants, and 435 square metres of office and commercial space.

The latest plan is a long way from the first proposed for the site, in 2000, for an 86-room hotel.

At that time, Old Perth Port was involved in developing the site with hotel operator Country Lodging Australia.

That plan involved a four-storey hotel at a cost of $13 million.

Property developer PH3 Property Group later took over as the developer and planned to complete construction on an amended proposal by March 2007.

The company got as far as laying the foundations and concrete pad for the hotel before the project ran into financial difficulties.

“Like anything, you go into a business venture with the best of intentions and hindsight’s a wonderful thing; they just didn’t have the facilities and the fiscal background in the end to get the project up,” Mr Richardson said.

“We can do as much due diligence as you like when you’re selling something to somebody -we own the businesses next door as well so we want to see it succeed, obviously - but in this case it didn’t and it took us a lot of money to get our own property back.”

Old Perth Port’s proposed development, at this stage named the Perth Waterfront Hotel, is expected to cost between $80 million and $110 million, but Mr Richardson said the final cost depended on the ultimate operator.

Mr Richardson said the ongoing strength of the Western Australian economy and need for hotel accommodation had prompted the new development plan, which more than doubles both the height and number of rooms originally approved by the Swan River Trust in 2000.

“Obviously over the intervening years the circumstances have changed with the economy, the coming on of Elizabeth Quay has really opened the way for how Perth will be in the next 15 to 20 years,” he said.

Mr Richardson said Old Perth Port was negotiating with a number of developers on its project and the outlook was positive for rapid progress.

“We’ve got some very strong interest at the moment and (the operators) want to get things started as soon as possible as well,” he said.

Interest had come from a range of potential international operators in the same company as the Langham Hotel group.

“We’ve had one formal offer, I’m expecting another (this week) and I’ve got people from the Middle East coming to talk to me about it as well,” Mr Richardson said.

The Old Perth Port proposal comes amid a ramp-up in hotel investment in the central city, with the Metropolitan Redevelopment Authority planning for a world-class hotel and residential precinct on a 6,800sqm site in Elizabeth Quay.

Mr Richardson said he was not concerned about the potential competition.

“The situation from this hotel’s point of view is that it will be there two, three or four years before the other (hotels in Elizabeth Quay) so it gives you a pretty good head start for people to get into the precinct as it develops and comes on stream,” he said.

Five proponents have been shortlisted out of 14 submissions for developments at the riverside precinct and asked to submit detailed proposals. The MRA is expecting to announce the successful proponent or proponents later this year.

Towards West Perth, the 15-room The Terrace Hotel has recently opened, while in East Perth the 184-suite Fraser Suite opened last October.

Meanwhile, building and construction company BGC has been nominated by the state government to develop a hotel on Hay Street - the size and cost will be determined over the next two months as the two parties finalise negotiations.

It’s the first development under the hotel incentives package announced in 2011, launched by the state government to encourage hotel investments.

Elsewhere in Perth, Crown is spending $568 million to develop the city’s first six-star hotel at Burswood, which will take total hotel room capacity to 1,200, while Aman Resorts’ redevelopment of the Old Treasury Building into a hotel is due for completion next year.

Hotel chain Oaks is also planning a 15-storey, 88-room hotel for Wellington Street, facing the City Link project, which the government has also indicated could include a hotel development.