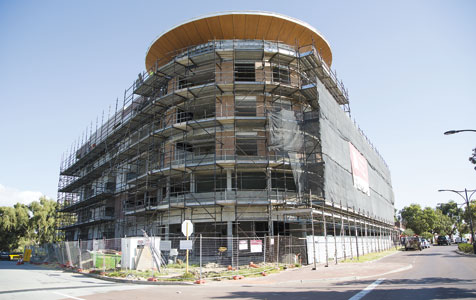 The revitalisation process has been in the works since 2010, when the Town of Bassendean offered for sale a key development site at the old squash courts at 85 Old Perth Road.

The sales process coincided with the development of Cedar Property Group’s nearby Walk on Wilson apartment project, which comprises 20 one and two-bedroom units built by Danmar Homes.

Town of Bassendean chief executive Bob Jarvis said the Walk on Wilson project was something of a litmus test for multi-unit developments in the area, which he described as being uncharted territory at the time.

However, Mr Jarvis said demand was so great for Walk on Wilson apartments that all units were sold before a marketing campaign was launched.

Construction of the project was completed last year.

At 85 Old Perth Road, construction is nearly complete on a five-storey, 40-apartment project being developed jointly by the Department of Housing and Jadd Developments.

The $9 million project, which includes commercial tenancies on the ground floor, is on track to be completed by July.

Two other large apartment projects on Old Perth Road are in the planning process, with construction expected to start on both in coming months.

At 93 Old Perth Road, Carter Giorgi Real Estate is proposing to develop a 22-residential unit complex, which will have three commercial tenancies.

Carter Giorgi principal Bruno Giorgi said the apartments would be a “well-finished” product, which would take 18 months to build.

Mr Giorgi said negotiations with a builder were in their final stages and construction was due to begin within two months, if not earlier.

“We’ve had very strong inquiry and we haven’t even promoted it yet,” Mr Giorgi told Business News.

“At long last people are really beginning to see the benefits of living in Bassendean.”

The other big apartment project proposed for Old Perth Road is The Whitfield, which has been put forward by former Brookfield Multiplex director Tim Willing’s development company, Willing Property.

The Whitfield will comprise up to 37 apartments ranging from one-bedroom units priced from $315,000, to two-bedroom dwellings starting at $449,000.

Mr Jarvis said detailed plans for The Whitfield were still being finalised, but he expected the project to be approved by council in coming months, with construction scheduled to be completed by mid-way through next year.

Perhaps the most significant project changing the face of the suburb, however, is the $27 million redevelopment of Bassendean Shopping Village by Hawaiian and built by PACT Construction.

The shopping centre works are well under way, with the two-storey development expected to be finished by June.

The centre has a Coles supermarket as an anchor tenant, while Dome Cafe has confirmed it will take a major tenancy once works are complete.

Redevelopment works at Steel Blue Oval could also further transform the suburb, with LandCorp, Swan Districts Football Club, the Town of Bassendean and the Western Australian Football Commission exploring options to develop up to 98 apartments on the site.

While definitive plans for the oval are yet to be released, a concept plan was provided to council in 2012, which flagged high-density residential units, commercial and office space as well as redeveloped sporting and entertainment facilities.

A memorandum of understanding was signed by key stakeholders mid-way through last year, while negotiations for a formal heads of agreement are continuing.

Mr Jarvis said the combination of the projects meant Bassendean’s town centre was coming of age.

“The council believed that if we provided the stimulus that others would follow, and I think that 93 Old Perth Road and The Whitfield site have demonstrated that strategy was successful.”

Mr Jarvis said the revitalisation of Bassendean was similar to the redevelopment which took place over recent years in nearby Maylands.

“For a long time Maylands had the old shops that were empty, and then the Match development happened and the Dome moved into the old Peninsula Hotel, and Maylands took off,” Mr Jarvis said.

“But the secret is you have got to have people living there, and the unit developments in Maylands provided the customers for those businesses to be successful.

“The three apartment developments on Old Perth Road, along with the units in Wilson Street, will provide those extra customers right in the town centre, which will allow those businesses to be successful.

“That is still subject to licencing approval, but that, along with the fact that Dome have put their hand up to become part of the shopping centre upgrade, shows that Bassendean is becoming an urban hub.”