Offworld Productions has added another string to its bow as it gears up for summer. 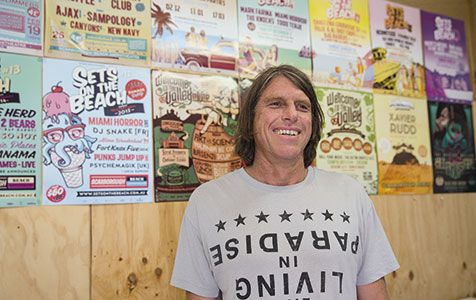 Fremantle-based Offworld Productions is planning for its busiest summer yet with the addition of another event to its lineup.

The company has expanded on its popular Sets on the Beach live music concert held in Scarborough, and launched a city version aptly named Sets in the City.

The first city event is being held early next month on land adjacent to Langley Park between Riverside Drive and Terrace Road.

Offworld Productions director Andrew Bailey said the intent was to create an event that appealed to a different segment of the live music market.

“The idea is that it’s sort of a pop-up venue rather than the big festival type of thing,” Mr Bailey told Business News.

The boutique focus is characteristic of Offworld Productions, which limits ticket sales for any of its event to 5,000.

The Sets on the Beach events, which began in 2010, are held at the Scarborough Beach amphitheatre and have proven particularly popular with a younger crowd.

“With Sets (on the Beach) it was kind of good timing because there wasn’t a lot on in Scarborough and the council were very supportive of the event when we initially brought it to them,” Mr Bailey said.

“By doing the hard work and producing a good event they’re happy for it to keep on going.”

The launch of Sets on the Beach came around the same time as the demise of the national Good Vibrations Festival, which Offworld Productions had been co-promoting in Perth since 2002.

That event would draw between 25,000 and 30,000 music lovers, but Mr Bailey said festival fatigue had set in for the public due to the growing number of large-scale events of that type.

“I think it goes in cycles; there were the massive festivals and everyone was going to them … but then after a little while they were like ‘well, I’ve kind of been and done that’,” Mr Bailey said.

“Having said that, the big festivals are still selling strongly so there’s certainly a place for the bigger events, I think there was just an oversupply for a short while.”

Offworld Productions also sought to diversify through the launch of both Sundown Sessions, also at the Scarborough Beach amphitheatre but targeting an older crowd, and its Welcome to the Valley event.

The 2014 Welcome to the Valley is being held next weekend with around 4,500 people expected to descend on the Swan Valley for a day of Oktoberfest-inspired entertainment.

Offworld launched the event last year, partly motivated by the end of the Spring in the Valley weekend, which had been run Swan Valley Tourism Council.

For two decades the event attracted thousands of people (up to 70,000 in 2008) but Mr Bailey believed it had become a logistical nightmare and, generally, gotten out of hand.

Mr Bailey said he had worked to mitigate that happening again by keeping Welcome to the Valley to a manageable size, with only two locations in the Swan Valley involved during the day and a concert at the Belvoir amphitheatre at night.

Offworld Productions has brought acts such as Missy Higgins, Xavier Rudd, and The Ashton Shuffle to Perth, which Mr Bailey said was his biggest challenge.

While retaining a focus on boutique events helped as they didn’t require the big-name headline acts, Mr Bailey said it was still a struggle securing some of the lesser-known artists simply because the market was so competitive.

“You’ve got to know what you’re trying to achieve at the start and try and seek acts based on that … it kind of comes down to luck of the draw on occasion, history of the event, and providing something that an act would want to play at,” Mr Bailey said.