Finbar Group has sold the serviced apartments component of its latest project in West Perth, striking a deal worth $12.5 million with a funds management group headquartered in Singapore and Hong Kong. 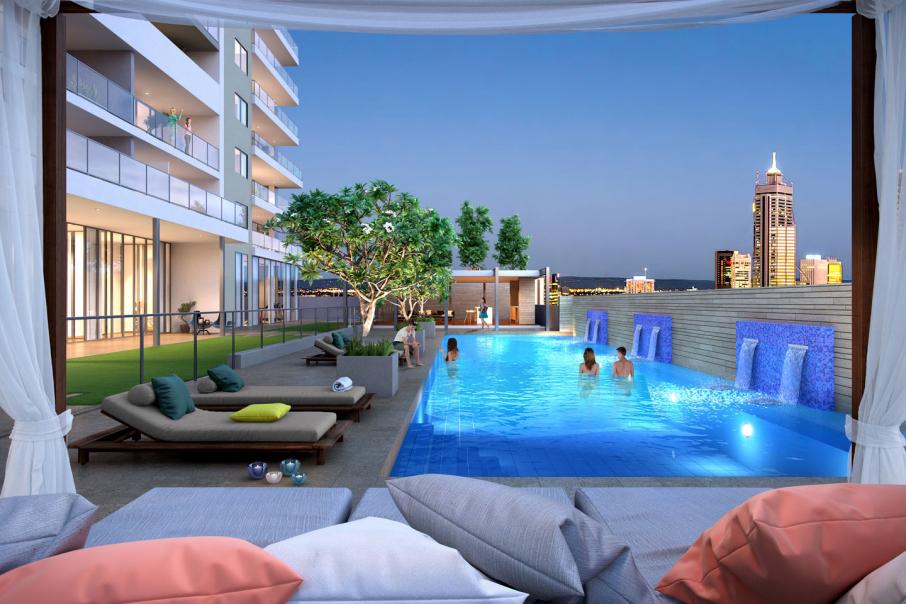 Amenities at the Aire project include a pool deck on the building's fourth floor.

Finbar Group has sold the serviced apartments component of its latest project in West Perth, striking a deal worth $12.5 million with a funds management group headquartered in Singapore and Hong Kong.

Western Australia's largest apartments developer today announced to the ASX that it had sold the 64 serviced apartments located in the podium of its Aire development in West Perth to ZACD Group, for a total consideration of $12.5 million.

The acquisition price equates to around $195,000 per studio apartment, which are a substantially different product to the other apartments at Aire, which have starting asking prices of $385,000 for one-bedroom dwellings and $507,500 for two-bed apartments.

Finbar said the 64 dwellings would be operated as short-stay apartments, with a separate lobby, lift core and car bays to the rest of the apartment building, which will contain an additional 178 apartments.

The deal was brokered by Prime Resort Sales in association with Resort Brokers Australia.

Finbar expects Aire, which has an end-value of $106 million and is located at 647-659 Murray Street, will be complete by the middle of next year.

Managing director Darren Pateman said 70 per cent of the residential apartments and all of the ground floor commercial lots in the project had been sold, while construction was up to the 21-level building’s eighth floor.

ZACD Group, a real estate and wealth management company established in 2005 by Yeo Choon Guan, has ,largely been active in Singapore Indonesia and Malaysia.

The company’s first foray into the Australian market came with its $27 million purchase of a Melbourne office building earlier this month.