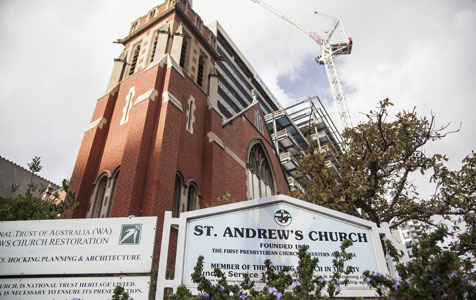 The heritage-listed church has been closed since earlier this year. Photo: Attila Csaszar.

The Uniting Church has abandoned plans to create a 22-storey office tower at its St Georges Terrace site, lodging a development application with the City of Perth to build an $88 million apartment tower instead.

The church had been planning to build a $22 million office tower behind the St Andrew’s Church since its development application was approved in August last year, but the proposal hinged on securing an anchor tenant to take up most of the office space.

That approval was set to be valid for another 14 months, but, according to City of Perth documents, the plan has been abandoned in favour of a 35-storey residential building.

The application lodged last week with the City of Perth is to seek approval to demolish the existing commercial buildings on site and create an apartment tower, which will be supplemented by retail and food and beverage tenancies on the ground floor.

The church itself, which is heritage-listed, has been closed since early this year due to issues with its supporting structure and roof.

In May, Uniting Church associate general secretary Robert Locke told Business News an important part of any development proposal was restoring the church to its former glory.

Mr Locke was not immediately available for comment today.