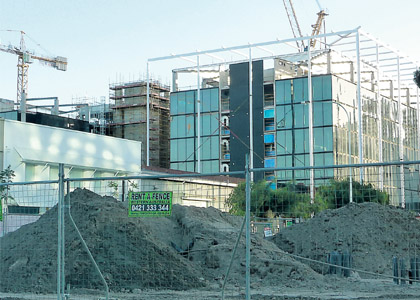 IN THE ZONE: The WorkZone development in Northbridge will add 28,000sqm in office space.

CONSTRUCTION of nearly 100,000 square metres of office space is under way in Perth’s near-city suburbs, with the start of work on a 15,000sqm complex in Herdsman Business Park.

The 11-storey building at 20 Walters Drive, developed by Buxton Holdings, will be one of Perth’s largest suburban office complexes when it is completed in May 2014.

While more than 60,000sqm of suburban office space was added in 2012, the vacancy rate fell from 11.4 per cent in February to 9.7 per cent in September, according to the Y Research’s Western Australian Suburban Office Report. An additional 97,000sqm is under construction.

Y Research principal Damian Stone told WA Business News tight supply in the CBD had led to companies searching for more affordable headquarters, most of which was confined to suburbs at the fringe of the city.

“Somewhere like Subiaco has benefited a lot from the city and West Perth being tight, particularly the rental levels where you can save 10 to 15 per cent a year moving three kilometres down the road, or even 1,500 metres down the road in some cases,” Mr Stone said.

Nearly half of the 60,000sqm of suburban office stock forecast to be added in 2013 will come from Charter Hall’s 28,000sqm WorkZone development at 202 Pier Street in Northbridge.

WorkZone will consist of two seven-level A-grade buildings, with anchor tenant Leighton Contractors to take out 21,000sqm for its new head office. While development has largely been concentrated in areas on the edge of the CBD, Herdsman has defied the trend and is now Perth’s second-largest suburban office market, behind Northbridge.

CBRE senior director Andrew Denny, who will act as the leasing agent for the development at 20 Walters Drive, said construction had started without a lease pre-commitment, reflecting “a strong vote of confidence in the Perth office market”.

“With the attractive rent, outgoings and car bay costs, 20 Walters Drive has the potential to provide massive cost savings for tenants when compared to the CBD.”

Mr Stone said Herdsman had a competitive advantage over other suburbs because of the high quality of the buildings in the area.

“There are major tenants out there already, including the government and a lot of construction services (firms) to the mining industry,” he said.

“But also, it’s got the highest proportion of quality buildings. Seventy-one per cent of everything in Herdsman is an A or a B-grade building where, if you look at suburbs like Subiaco and Fremantle, it’s less than 50 per cent.

“There’s a real shortage of quality buildings - the big, modem buildings that major tenants want, with sustainability ratings, big floor plates, good technical services - Herdsman has it, Northbridge has it (but) not a lot of other suburbs have it.”

A further 150,000sqm of suburban office space is being actively proposed.

Energy giant Shell is set to become an anchor tenant at Leighton Properties’ proposed Kings Square development on the former Perth Entertainment Centre site, which is on the fringe of the CBD but categorised as suburban.

The first stage of the project features an A-grade 11-storey building with approximately 20,000sqm of office space.