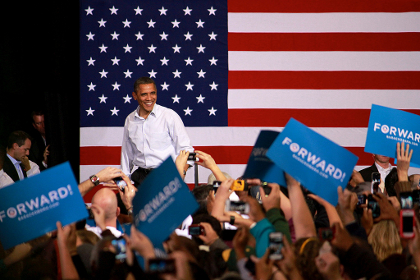 The BBC is reporting that Mr Romney conceded the election to Mr Obama in a phone call a short time ago.

The popular vote has been virtually split down the middle. So much for bipartisanship, Dr Ondaatje said.

Bates Gill, CEO of the centre, said he was slightly pessimistic about America's near-term economic prospects.

It's possible that America could grow itself out of this, but the economy could continue to be a drag and for Australia that's a real concern in the near term, said Professor Gill.

He said Obama faced extreme difficulties without a serious mandate.

David Weisbrot, professor of legal studies at the centre, warned: "If the US economy tanks any further it could have a deep effect on Australia."

That view was supported by Prof Gill, who said despite Australia's shift of focus from the US to Asia, the US was still the biggest investor in Australia, by a factor of five.

"So don't write us off as your economic partner," he said.

The Obama team had put more time into thinking through the importance of the Asia-Pacific region, said Prof Gill.

"So you can have a higher degree of confidence that Obama will keep America's focus here and see Australia as a key ally," he said.

Dr Ondaatje said both sides were committed to the ANZUS alliance, so the differences were "negligible".

"So a strong, prosperous US would give Australia the best of both worlds," Dr Lockyer said.

He said both Democrats and Republicans were on course to increase America's military presence in the Asia-Pacific because "that's where America's future interests lie".

There were few strategic or economic implications for Australia in the election outcome, but Obama remained a popular figurehead for Australians.

That much was clear as hundreds of students cheered Obama's successes as they feasted on hot dogs and popcorn at a Sydney University election day gala.

"In the US Obama is no longer the first black president, just another president who happens to be in office during a time of continuing high unemployment," Dr Lockyer said.

"But in Australia he is still seen as a symbol, as the best of America."