The major accounting practices are leading the way in employment growth, which is up almost a third since 2010. 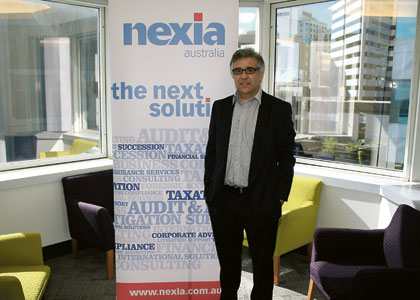 DIFFERENT: "We don't have a corporate model, Nexia is a federation of independent firms, and that gives us a lot of the benefits like the technical support employed by the group." - Mal Di Giulio (pictured)

The major accounting practices are leading the way in employment growth, which is up almost a third since 2010.

THE number of accountants working for the top 20 firms in Western Australia has grown by 28 per cent over the past two years, research by WA Business News has found, and the ‘big four’ have led the growth.

While some firms, including Ernst & Young, have recently trimmed a handful of positions, this has not changed the strong growth trend.

Total employment has grown every year for the past decade, except between 2009 and 2010 when employment plateaued after the GFC.

The big four firnis have significantly increased their market share, during both the past year and the past decade.

Ernst & Young remains the state’s largest accounting finn with 635 accountants and 680 staff in its Perth office.

PwC continues as number two, while Deloitte hung onto the number three ranking - a point it reached after absorbing the former PKF audit practice in 2010.

The largest challengers to the big four are RSM Bird Cameron (237 accountants) and BDO (216 accountants), which also got a large boost from the break-up of the old PKF practice.

Taking a longer view, Deloitte and PwC were the two standout firnis during the past decade, each growing by about 300 per cent.

Tracking the growth of mid-tier firnis over the same period is problematic, because many have rebranded or merged.

The mid-tier firnis have also adopted a wide range of ownership structures as they strive for the right mix of local flexibility and national integration.

The rebranding occuned less than two years after the old MGI Perth merged with Ord Nexia, to establish a finn that now employs 70 accountants, ranking it number 11 in the state.

“We don’t have a corporate model, Nexia is a federation of independent firms, and that gives us a lot of the benefits like the technical support employed by the group,” managing director Mai Di Giulio told WA Business News.

Mr Di Giulio said that, as a federation of independent firnis, Nexia provided shared technical support in areas such as audit, tax and training.

He added that Nexia was a better network because all of the member firnis were full- service practices of a similar size.

Meanwhile, MGI is believed to be in advanced discussions with a Subiaco practice that is looking to join the network.

The ASX-listed accounting companies give added insight to the sector’s performance.

WHK Limited, which is in the process of changing its name to Crowe Horwath Australasia, reported tough going for its national network of 110 offices

Its Australian business services division lifted revenue by just 4 per cent, to $263 mil­lion, in the year to June 2012.

WHK’s initiatives include a centralised shared services platform for back-office functions like payroll, HR and IT, which Mr Kidd said was meant to assist the accounting practices.

“I feel a great sense of autonomy here,” he said.

Mr Kidd said WHK’s remuneration struc­ture was designed to encourage a sense of ownership within each practice.

“Our remuneration is directly affected by how much we grow,” he said.

ASX-listed Countplus has a more decen­tralised structure, and that’s just the way Philip Rix likes it.

His firm, Bentleys, is one of 20 account­ing and financial planning practices owned by Countplus, which lifted revenue by 11 per cent to $90 million last year.

“Recruitment, marketing, operations all stay with each of the businesses,” Mr Rix said.

“If you centralise everything, you can take away the entrepreneurial flair.”

Mr Rix said being part of a listed company delivered three main benefits: it created some liquidity for equity in the business; provided a transparent valuation; and delivered access to capital for growth.

Countplus said Bentleys delivered “strong results” last financial year but its second WA firm, Lawrence Business Management, was described as a “distraction”, after having to restructure its legal services operation.

The group seems to have learnt that legal and accounting services are not always a good fit, with chief executive Michael Spurr com­menting that, “legal services are unlikely to be a growth driver in the group”.