SPECIAL REPORT: The top winner at this year’s Rising Stars awards is a Perth startup making rapid inroads into the wearable technology market. Click here to read about Nuheara and the eight other category winners. 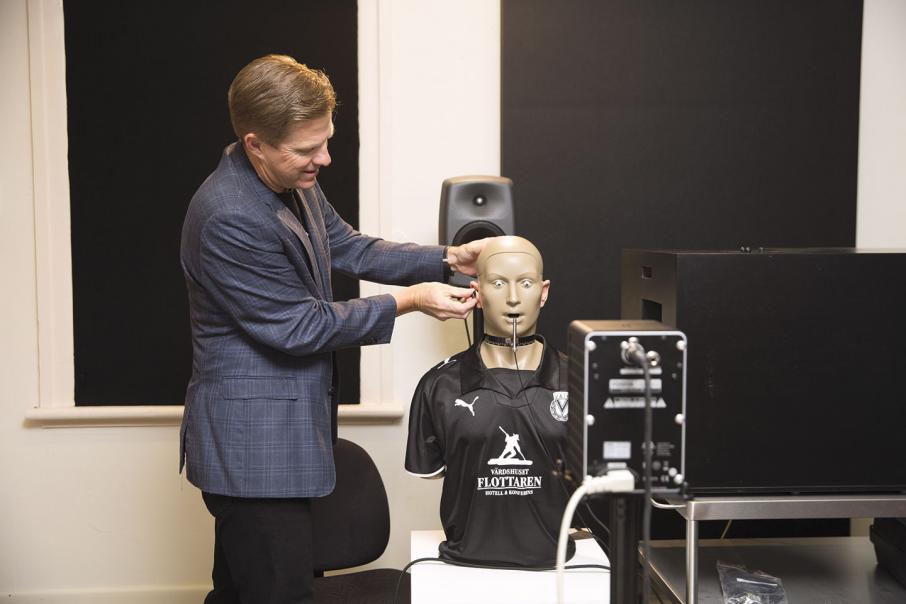 The thought of being able to selectively hear certain noises or conversations while filtering out others in a crowded restaurant or a packed sports stadium sounds more like science fiction than science fact.

But 2017 Rising Stars winner Nuheara has created a device that does exactly that.

See coverage on the eight other category winners below:

At first glance, the business’s IQ buds seem just like any other wireless headphones – they play music and take phone calls.

However, beneath the IQ buds’ casing sits an ‘intelligent hearing processing engine’, where Nuheara’s noise cancellation technology interacts with high-fidelity microphones to change the focus and characteristics of incoming sounds, allowing the user to control the levels of noise in different environments.

Users can augment their hearing via the Nuheara app. For example, at a football match IQ buds can be used to turn down crowd noise and balance a friend’s conversation with live-streamed commentary.

In January, Nuheara received FCC certification for sale of IQ buds in the US. Within 30 days it had sold $1 million worth of product across 80-plus countries.

The IQ buds are now available in major US outlets, including Best Buy and Amazon, as well as across the UK.

And products could soon be available commercially in Australia. At the end of May, Nuheara entered a retail partnership with Widex Australia for its IQ buds to be sold in Bloom Hearing clinics across the country.

The idea for IQ buds emerged from Mr Miller’s first foray into the auditory space in 2006 when he founded Sensear, which provided noise-cancelling headsets that enhanced communication in industrial settings.

Mr Miller said because that product was so effective, users would often ask if there was a pair they could wear in noisy environments beyond the mine site or workshop.

Intrigued by this concept, after taking a step back from Sensear, Mr Miller enlisted the help of the team he had worked with previously, including PhD students from Curtin University, to create a new product.

“There are lots of good ideas and businesses out there that don’t make it; it’s all about how well you recruit your team, no matter how good your technology is,” Mr Miller told Business News.

“We had experience in audio and building products for ears for well over a decade, so we knew what he had to do and how to go about it.”

At the same time, Mr Miller said the wearables market took off and, as a result, components like processing chips and batteries became small enough to fit in the ear.

Nuheara was founded in 2015, with co-founder David Cannington based in the US for sales and marketing and the remainder of operations, including research and development, in Perth.

The company listed on the ASX through a reverse takeover of Wild Acre Metals later that year.

By January 2016 it had built its first working prototype and ran a crowdfunding campaign on Indiegogo, where it raised almost $US800,000 ($A1.04 million).

“Venture Capital in Australia all wanted the same thing, revenue positive, which was difficult to do, particularly with a hardware product,” Mr Miller said.

The campaign had also attracted more than 100 different interested retailers and distributors, and had opened up new market possibilities, with people who have autism and auditory processing disorders now using the IQ buds to improve concentration.

Mr Miller said Nuheara was lodging patents for its next generation of products.

“You have to be that quick to market otherwise you lose that opportunity,” he said.

“And the world’s now moving towards voice activation … so the ear is an important part of the next evolution of computing.”

Stars rise up from the shadows

Business News has expanded its diverse and dedicated judging panel for the 2017 edition of Rising Stars, building on the stability in the group in recent years.

As a group, we met three times from late

May, including an afternoon of interviews with four category winners, from which we chose the final winner, Nuheara, after considerable deliberation.

As usual, it was a challenge to separate what were clearly very solid but diverse businesses guided by strong leadership.

We also had some new categories this year, which provided a better way to compare businesses or different types, and more fairly recognise success.

Although the winner was a startup that has raised considerable funds to list on the ASX, the qualities of the finalists it beat should not be underestimated: all are performing at a high level in competition with mature businesses in far more traditional segments of the economy.

Notwithstanding the significant degree of success achieved by the finalists and winners, the economic circumstances that are peculiar to Western Australia were again obvious when the entries were viewed from a helicopter level.

However, most in this cohort appear to have left the worst of the local downturn behind them, hence their confidence to enter Rising Stars.

As a judge, it was heartening to see such performances from companies that are leading us out of the shadows of the mining bust.