Nothing minor about de Laeter

What does a typical day at work involve? I check e-mails and answer those that need immediate action, then check appropriate articles in scientific journals. 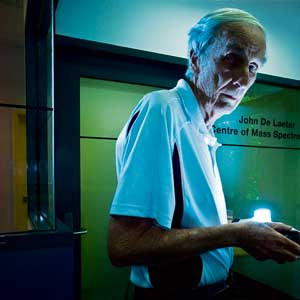 What does a typical day at work involve?

I check e-mails and answer those that need immediate action, then check appropriate articles in scientific journals. My work is operating the mass spectrometer to measure isotope ratios. In the evening I read the relevant scientific articles and plan future experiments.

Describe the buzz of finishing a research paper.

One gains enormous satisfaction of seeing one's research work in print as the article has been scrutinised by experts and deemed good enough to be published in an international science journal.

What is the most frustrating thing about your industry?

The rapid development of sciences, particularly in physics, means that it is very difficult to keep up to date with all the amazing research going on around the world. It is frustrating when you know that it is impossible to keep up with your field.

Who are your colleagues?

The beauty of research is that you often work with colleagues and, of course, your students. I have always found my scientific colleagues both, at Curtin and internationally, to be good to work with.

How would you describe the relationship between scientific research and the business community in WA?

Attempts have been made to improve the relationship between academe and industry, and the state government has been quite active in this regard; the Bentley Technology Park being a great example of this endeavour. There are also strong linkages in the resources industry. Undoubtedly more can be achieved, but WA enjoys a good relationship, often through the Australian Research Council's Industry Linkage Scheme, cooperative research centres and the like.

Has your infatuation with your work ever affected your personal relationships?

No, but maybe you should ask my wife.

The excitement of planning a research project, executing it successfully, and having your work accepted by the international science community. I guess also the satisfaction of a job done to the best of your ability.

John de Laeter's name may not be familiar to everyone, but it's not for lack of effort.

SCIENCE luminary John de Laeter has had a road, a department building, a Centre of Excellence in Mass Spectrometry and, more recently, a minor planet named after him.

"I'm working my way up," jokes the Curtin University emeritus professor of physics, whose latest namesake is an asteroid in orbit between Mars and Jupiter.

"This [Curtin University physics department] building was named after me when I was battling bowel cancer. They normally name buildings after you when you are dead.

"I suppose they thought they'd do the right thing by me and get an early start," said Professor de Laeter, who has clearly shrugged off that concern and remains physically active, including a game of tennis before the interview, despite nursing a sore wrist.

But facing a life-threatening illness has not been the academic's only way of drawing recognition. Last month, his name was entered into the Western Australian Science Hall of Fame as Premier Colin Barnett praised Professor de Laeter's dedication to science, which he said, "has helped influence the direction of sciences research internationally".

Professor de Laeter's CV includes measuring the atomic weight of 12 elements, acting deputy chairman of the world's second largest mineral sands company, and captaining a veteran's hockey team. Current work revolves around measuring isotope ratios via a mass spectrometer to determine the ages of some of the world's oldest minerals.

He is also chairman of the Gingin Gravity Discover Centre, a not-for-profit public and tourism centre that promotes science and technology education, and founder of The John de Laeter Centre of Mass Spectrometry. The centre is a joint research venture incorporating Curtin University, the University of Western Australia, Commonwealth Scientific and Industrial Research Organisation (CSIRO), and The Geological Survey of Western Australia, concentrating on integrative research in the minerals and petroleum sectors.

Tracing his professional career, the former senior master of science at Bunbury High School finds it difficult to pinpoint a highlight.

"Everything you do is an achievement in its own right," Professor de Laeter said.

He defines success as doing what you love, what you believe matters and makes a difference.

"You don't charter your achievement by isolated milestones."

Among his most significant accomplishments has been the founding of the Science and Maths Education Centre (SMEC), now teaching the largest postgraduate program in science and mathematics education in the world, which was recently awarded $42 million for research and development.

"I am passionate about science education. It is my background and has been a driving force in my work. I work with a lot of graduates who carry out much of the research work I instigate," Professor de Laeter said.

Professor de Laeter is quick to dispel the myth of the mad, lonely genius.

"Few scientists are individualists. Einstein was, but Einstein was unique. One of the things I find most exciting about working in science is the people; the inspiration, support and exchange of ideas."

The other is the challenge of solving the unresolved. "I have a certain mind and skills that help me tackle unanswered questions. That is the big draw," he said.

And a vital part of working with people is the flow and interchange of ideas it encourages, which can enable the mixing of disciplines.

Collaborative work has played a big role in his career, including early work with The Geology Society of Western Australia in the dating of the Pilbara craton and the Yilgarn cradle in a search for gold deposits.

"They found the rocks, I did the work. We published results together," Professor de Laeter said, adding that the rocks are now in the WA Mining Hall of Fame as some of the most gold-endowed formations in the state.

Professor de Laeter's idea to initiate the collaboration was, he admits, essentially a result of a need for funding, which he found a challenge as a novice.

By 1980, with his reputation set, "funding became available to research whatever I wanted", he says, including multi-million projects focusing on his primary astrophysical interests. Money, it seems, doesn't just make the world go round, but the whole universe, too.

A major driver of his ambition has been the compulsion to catch up, having missed out on years of research while still working as a teacher.

"The problem with science is that it's jolly hard work. There is an enormous amount of information, all of which you constantly have to read and swallow," he said.

Despite the recognition within the scientific community, Professor de Laeter shows no sign of stopping.

"I have a very fertile mind. I have always had many ideas about what I want to research and explore.

"When you are possessed by an idea, it fills your mind and it fills your life. It becomes the most important thing. I will stop with science when science stops with me."