Not so easy to axe this tax

It takes a fair degree of political skill to effect changes to even the most unpopular of taxes. 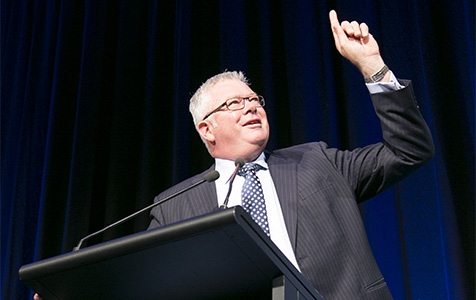 BURDEN: The treasurer says payroll tax and stamp duty on property transactions are expensive to administer and costly to comply with.

It takes a fair degree of political skill to effect changes to even the most unpopular of taxes.

Treasurer Troy Buswell may have put forward a strong case for getting rid of the much-criticised payroll tax, but the political reality is that it won’t happen any time soon.

The spotlight was shone on what’s often referred to in political circles as the ‘tax on jobs’ at the recent economic and political forum in Perth hosted by the Committee for the Economic Development of Australia.

The ANZ Banking Group’s managing director, Mike Smith, set the ball rolling when he said changes to the tax system were needed to encourage business investment and entrepreneurs. Change would also help to better commercialise research and development in industries, especially agriculture.

“We have something called payroll tax so we pay more tax for everybody we employ,” he said. “What sort of logic does that have? It is a crazy system.”

Mr Buswell referred to payroll tax in his address to the 650 people in the audience when he foreshadowed change, albeit modest, in the payroll tax threshold.

At present, companies with an annual payroll of more than pay a tax of $750,000. The threshold is tipped to rise to $800,000 in the May budget, with the prospect of a further $50,000 lift in 2016-17, which just happens to be an election year. This increase in the exemption threshold is expected to cost $121 million over the next three years.

Payroll tax is a big money spinner for government. Revenue jumped 12 per cent last year, reflecting both a growing workforce and higher wages being paid to more workers.

Mr Buswell expanded on his views on the tax, and state taxes generally, during question time. He said payroll tax, stamp duty on property transactions, and land tax were inefficient. They covered a narrow base, were expensive to administer and costly to comply with; “all the things you don’t want in a tax,” he noted.

“There would be a very strong argument in terms of productivity and national growth to get rid of all those and pick up the decline in revenue somewhere else,” the treasurer said.

He also pointed to the desirability for governments to have responsibility for their own revenue raising, rather than relying on the largesse of some central governing agency, as occurs in Australia.

“It is important because we only raise a small proportion of our total expenditure through taxation,” Mr Buswell said.

“There’s a disconnect between your tax effort and spending … and I reckon that one of the reasons states spend too much money is you don’t get penalised for having to put taxes up.”

He said there was a strong political imperative to be “wiser stewards of money”, and while these changes weren’t currently on the table for national debate, they covered an important area of national economic reform.

However Mr Buswell was wearing his ‘guardian of the state’s revenue’ hat when he appeared later on 7.30 WA to answer how CBH could have qualified for a refund of $38 million on its payroll tax bill when it was tipped to declare a profit of more than $150 million for the financial year.

The money had been refunded because CBH had been defined as a co-op, and therefore outside the payroll tax net.

“We have looked at this and have flagged we will make some changes in that space,” Mr Buswell said. “We have made it known to those entities that we will be changing the tax legislation because it is our view that they (operations like CBH) don’t fall under that not-for-profit or that non commercial definition.”

The Commonwealth ceded control of payroll tax to the states almost 50 years ago. The justification was that it would give the states a much-needed growth tax. Instead the states got the equivalent of a migraine headache.

The last big assault to abolish the tax was in the 1993 state election campaign. Richard Court pledged the state Liberals to axe the tax if John Hewson led the federal Liberals to victory nationally with his comprehensive Fightback package, which included a consumption tax. Although Mr Court was elected, the federal Liberals were not and the momentum was lost.

And although the government of John Howard eventually introduced a consumption tax, the basket of goods that fell into the tax net had to be trimmed to get the crucial support of the Australian Democrats senators. A number of ‘nuisance’ taxes were dumped, but payroll tax survived.

If payroll tax were to go, new revenue sources would have to be tapped. That could be the sticking point.

Any suggestion of a refund mechanism similar to the GST, with a declining proportion being returned to Western Australia annually, would be rejected out of hand.