Not all grim in ‘slow and steady’ market 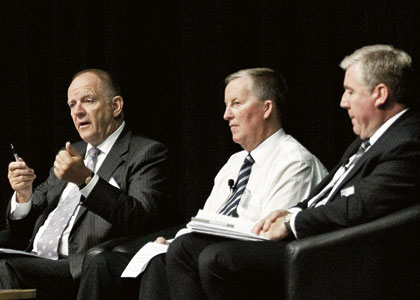 DESPITE the national 2.1 per cent fall in home prices in the December quarter painting an unflattering picture for the sector, property industry leaders remain optimistic about the year ahead.

“The property market is far from being in crisis, it is just slow. We are in a new market regime of low growth, steady growth for some years which everyone will need to get used to,” Mr Airey said.

According to RP Data’s analysis of house prices for the three months to December 2011, Perth was the worst performing capital city in Australia, dropping 2.1 per cent.

Prices were down by 0.5 per cent across all capital cities.

The fall in Perth for the month of December was 1.6 per cent, putting the Perth median house price at $450,000, RP Data said.

The continuing debt crisis in Europe has led to a fall-off in investor interest, particularly baby boomers, who are favouring interest-earning cash deposits over property, the breakfast gathering heard.

Mr Perrignon said boomers also had a level of influence over the first homebuyers’ market, given they are key advisers to their children (who typically comprise that market).

“The baby boomers are also the main cohort of an important buyer segment in the market, investment properties,” he said.

“They are having a very serious review of why they invest in residential property; steady rental income must be supported by capital growth. The rental market has been strong for several years now but they want to see capital growth.

“Their children are ready to buy houses and they are advising their children to be very careful about when they enter the market.”

The first homebuyers’ market has also been affected by the tightening of lending criteria.

Colliers International director of valuation and advisory services, John Del Dosso, who has worked closely with some of the state’s largest developers, said there had been an increased emphasis on community and local amenity, as well as greater mindfulness of price point.

“With the continuing focus on affordability and efforts to boost the homebuyer market, we believe we’ll see those trends continue into the future – most particularly with regard to coming up with innovative land and built-form product, creating wider choice at varying price points to meet not only the challenging market conditions but also changing demographic, industry and employment profiles,” Mr Del Dosso said.