Not all doom and gloom for Pilbara property

The end of the resources boom has resulted in a bleak prognosis for Pilbara property, but not all players think the region is on its last legs. 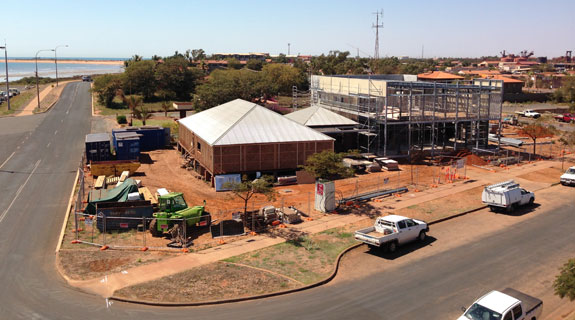 PROGRESS: Some Pilbara projects are still advancing, despite significant headwinds for the region. Photo: Attila Csaszar

The end of the resources boom has resulted in a bleak prognosis for Pilbara property, but not all players think the region is on its last legs.

It is no secret that the mining slowdown has had a big impact on the Pilbara property market.

But that’s all changed, as mining companies have pulled back investment as the mining boom shifts from construction to production.

The median house price in Port Hedland has come off $320,000 since its peak of $1.2 million in 2013, while year-on-year prices have dropped by 12.3 per cent, according to figures from the Real Estate Institute of WA.

Megara managing director Matthew Pickford, who has presided over more than $200 million worth of Pilbara property projects, said the market conditions had forced the company out of the region, to concentrate on its developments in Perth.

“We wouldn’t have sold a house and land package in the Pilbara for probably eight months,” Mr Pickford told Business News.

Mr Pickford said the reduction in median prices was a more normalised market, but the reduced valuations were holding back new housing and commercial developments.

“Rents are stable and they are probably at a level that’s good enough for some sort of investment there,” he said.

“It’s not a disaster, but you can’t back any numbers up in terms of doing developments if valuers are putting prices on that are way below replacement costs.

“What they’re valuing, we couldn’t even build at that price.

“Until they are willing to put a higher number on, it’s difficult to see much development activity happening in the Pilbara, but there’s still rental demand there.”

Surprisingly, the depressed conditions haven’t completely scared all of Western Australia’s developers out of the north.

The state’s biggest apartment developer, Finbar Group, reaffirmed its commitment to the Pilbara earlier this year when it finalised a near $6 million deal to buy the former Port Hedland hospital site from LandCorp, in order to advance a $390 million apartments and office project.

While Finbar put a caveat on the transaction that it would have to meet pre-sales targets for the project to proceed, it’s viewed in the industry that the long-term fundamentals of Port Hedland, notwithstanding the short-term pain, are still solid.

Another group to have shrugged off the cyclical nature of the mining industry to pursue new projects is Macro Realty Developments, which has been developing in the Pilbara since 2002.

Macro Realty is currently advancing five developments in Port Hedland, South Hedland and Newman, the largest being a 244-lot subdivision in Newman.

The developer currently has around $168 million of funds under management, mostly sourced offshore from institutional investors convinced of the long-term potential of Pilbara property.

Macro Realty also has a venture capital fund as part of its model to ensure there is cash available to provide place-making businesses such as cafes, gyms, bars or child care facilities, alongside housing developments.

Director Veronica Macpherson, a finalist in this year’s EY Entrepreneur of the year awards, said the level of mining activity, even though it had come back from the peaks of the boom, meant there was always going to be latent demand for new housing in the Pilbara, especially considering the proliferation of mining camps and low-quality houses in Pilbara towns.

“You need proper housing up there, no matter which way you look at it – there’s definitely a need,” Ms Macpherson said.

“The amount of caravans, shipping containers and dilapidated houses up there warrants trade-up.”

She said the timing was right to ramp up development activity in the Pilbara, now the heat had come out of the resources sector somewhat.

“Ultimately building the cities is the solution, but it’s very hard to do when you’ve got a mining boom on,” Ms Macpherson said.