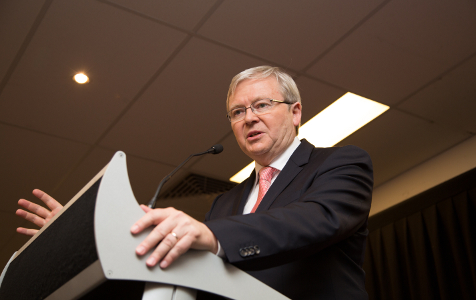 Prime Minister Kevin Rudd says plans to introduce tax concessions and incentives in the Northern Territory could be extended to northern Western Australia and Queensland.

Mr Rudd this morning travelled to WA for the first time since calling the election just under two weeks ago, amid reports of growing tensions within the Labor campaign.

He announced yesterday that Labor would establish a special economic zone in the Northern Territory if re-elected, including plans to cut the corporate tax rate by up to a third for companies based in the territory.

WA Premier Colin Barnett lashed out at the prime minister for “ignoring” the Kimberley area in the policy, but Mr Rudd today said the plan could be extended west.

“In terms of northern Australia, that vast stretch north of the tropic of Capricorn is generally accepted as the definition.”

Media reports today indicated that senior ministers of Mr Rudd’s cabinet, including Education Minister Bill Shorten and Resources Minister Gary Gray, were not made aware of the full details of the northern Australia policy before it was announced.

Mr Rudd said he would not be commenting on internal processes.

“You would expect that during an election campaign, when the final product of a policy is put out, that the ministers are informed of that at that time,” Mr Rudd said.

“The treasurer and the finance minister have been on the detail for a long time and this policy has been worked on.”

He said the northern Australia policy would not be costed until at least next year as the plan would be delivered outside of the forward estimates.

Swan is one of two marginal Liberal-held WA seats that Labor hopes to win back, in addition to retaining its three existing seats of Perth, Brand and Fremantle.

The party also hopes to win back Hasluck, which the Liberals hold by just a 0.6 per cent margin, but Mr Rudd did not visit that electorate today.

A series of opinion polls published today indicate Labor faces defeat in a number of key seats in New South Wales and Queensland.

Opposition leader Tony Abbott is reportedly set to make his first appearance in WA for the campaign this weekend.