Shares in Northern Star Resources and Saracen Mineral Holdings rose strongly today after they announced a merger to create a top 10 global gold producer with a market value of $16 billion. 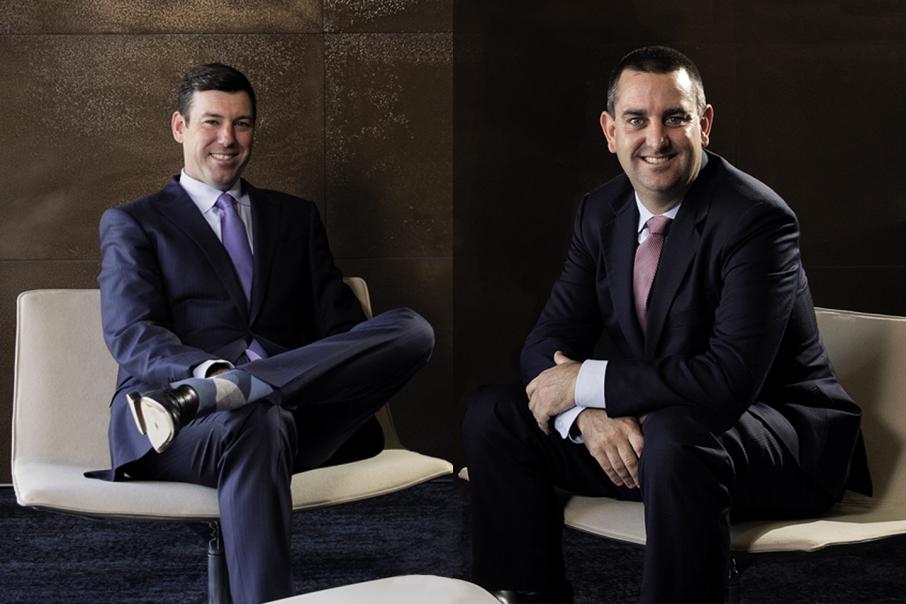 Bill Beament (left) will be chair of the merged group and Raleigh Finlayson will be managing director. Photos: Attila Csaszar

Shares in Northern Star Resources and Saracen Mineral Holdings rose strongly today after they announced plans to merge to create a top 10 global gold producer with a market value of $16 billion.

The merged company, which will trade as Northern Star Resources, will have immediate production of 1.6 million ounces per annum with plans to expand to 2 million ounces pa.

The merger - to be implemented by Northern Star making a scrip takeover of Saracen - comes less than one year after the two companies each bought a 50 per cent stake in Kalgoorlie Consolidated Gold Mines, which owns and operates the Super Pit mine.

This positive reaction reflects the deal’s structure as a ‘merger of equals’. In most takeovers, the bidder pays a premium for the target and often suffers a fall in their share price.

Under the scheme of arrangement, Northern Star executive chair Bill Beament will be chair of the merged group with a focus on integration, transitioning from executive to non-executive chair in July 2021.

Northern Star’s Stuart Tonkin will retain the title of chief executive and will become managing director of the merged company after Mr Finlayson moves to an ED role.

The boards of both companies unanimously recommend that shareholders vote in favour of the scheme.

Mr Beament said the merger would create an abundance of value for both Northern Star and Saracen shareholders.

“This is significant value-creating M&A,” he said.

“Our position as joint venture partners at KCGM, the close proximity of the majority of the combined company’s assets and a host of other synergies, make this a unique opportunity exclusive to Saracen and Northern Star shareholders.”

Mr Beament emphasised that all of the company’s assets were all in tier one locations, and that it would meet the investment criteria of global investment funds.

“It will have greater appeal to global investors,” he told a conference call.

The only other ASX-listed gold miner with a larger market value will be Newcrest Mining, with a market capitalisation of about $25 billion.

Mr Finlayson said the pre-tax synergies were expected to be worth in the order of $A1.5 to $A2 billion over the next 10 years.

“Saracen shareholders will own 36 per cent of the combined group and therefore share in the significant benefits of these synergies, which is value that would not have been available to our shareholders otherwise,” Mr Finlayson said in a statement.

“It is difficult to foresee anything like that reduction in our cost base outside of this merger.

“This is one of the most logical and strategic M&A transactions the mining industry has seen.

“The savings, the synergies and the growth opportunities it will generate make the transaction extremely compelling.

“In short, it is a unique opportunity for Saracen shareholders unlikely to be replicated via any other avenue.”

The Yandal centre will combine the Jundee, Thunderbox and Bronzewing mines, with targeted production of 600,000oz/year.

The third centre will be North America, based on Northern Star’s Pogo mine, with targeted annual output of 300,000oz.

Corporate overheads would be reduced because three companies – Northern Star, Saracen and the KCGM joint venture – would become one, removing duplication.

Operational savings would include the increased flexibility available to the group to optimise the processing of ore from different mines, as well as procurement savings.

Mr Finlayson said the potential benefits became increasingly apparent as the two companies worked together at KCGM over the past nine months.

“Every day it just made more and more sense,” he told the conference call.

From a production perspective, the merged company will overtake Gold Fields to become the largest gold miner in WA, according to Business News's Data & Insights.

Gold Fields produced 973,000oz from its WA mines in the year to June 2020, Northern Star produced 731,000oz and Saracen 520,000oz. The latter numbers included only about six months ownership of the Super Pit.