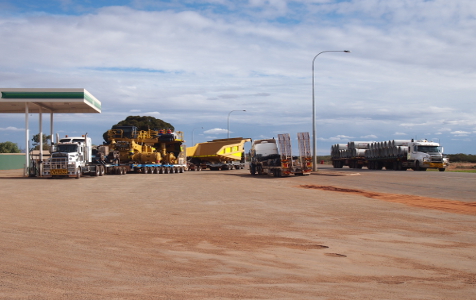 TRUCK STOP: The Great Northern is a heavy-haulage highway.

My family’s recent whirlwind holiday to Karijini National Park in the centre of Pilbara has reminded me of the opportunity that lies in the state’s north.

When travelling up the centre of the state via the Great Northern Highway, it is astounding to realise this is an almost entirely commercial road, dominated by huge road trains and frequent wide loads that frequently stop the traffic going in both directions.

The scale of the goods being moved over such vast distances – from transportable villages to haul pack trucks so giant that their tray and chassis travel separately – seems so inefficient that there must be an opportunity to change this.

It is a logistics challenge that is only usually faced by armies invading hostile territory; history tells us that on most occasions the challenge is too great to be sustainable.

Just by way of example, a haul pack moving from Perth to the Pilbara takes three days of sunrise to sunset travel. These extra-wide-load convoys require at least three pilot vehicles and two road trains, each presumably staffed with two drivers to share the long day. That is an expensive business when accommodation, food and fuel are all accounted for.

Why does this state not have a rail service or even fast ferry ships that could do this job more easily? Of course, trucks offer a point-to-point solution that other transport methods struggle to deliver.

Ships come with nasty union problems, require bigger job lots to make them efficient, and still you have to get your gear from the port after the risks of unloading.

Trains would be challenged by the biggest of this equipment and the tracks would need to be built well apart to allow seamless travel that even much wider roads struggle with.

Alternatively, the work on this equipment could be done in the north, although the issues around that are well known. To attract the workers to the north, Australia would need to be more generous to people from elsewhere, including other countries, providing much better infrastructure and, probably, tax-free status while they lived there.

In my view, we ought to have Snowy Mountains Scheme equivalent, offering migrants (including refugees) the opportunity to build a really big city in the Pilbara to provide for long-term employment in the area, which needs to be more diverse than just resources, including a defence base and more intensive agriculture. (I have written about this idea previously http://www.businessnews.com.au/article/Pilbara-city-a-chance-to-overturn-40-years-of-missed-development-opportunities)

If refugees can pay people smugglers $10,000 to risk their lives coming to Australia by boat, let’s allow them fly safely to the Pilbara, with citizenship the reward if they stay there and work for a period of four or five years. With luck, many will make a new life for themselves in the region, especially if their reward included cheap land.

Travelling up the Great Northern Highway and down the coast on our return, you can’t the miss the need and the opportunity to do more. Premier Colin Barnett may have miscalculated when he proposed a canal from the Kimberley to Perth in the 2005 election, but finding a way to take abundant water from the north to south, as we have with gas, ought to be a priority.

Central WA would spring to life and all those outposts servicing yellow goods convoys could become more self-sufficient.

Many opponents of development suggest that the boom has been wasted and profits reaped offshore. They think the answer lies in reducing growth and using mining profits to encourage our existing population to stay cocooned in established cities in the south. In my view that is not sustainable.

Instead we need to look at ways of leveraging from the boom’s legacy – a doubling of productive capacity – to create a new, optimistic and exiting vision that attracts the right people to this nation and helps us grow to our full potential.