OPINION: Despite the seemingly endless alterations to the streetscape of the central city since the Barnett government, the work is incomplete. 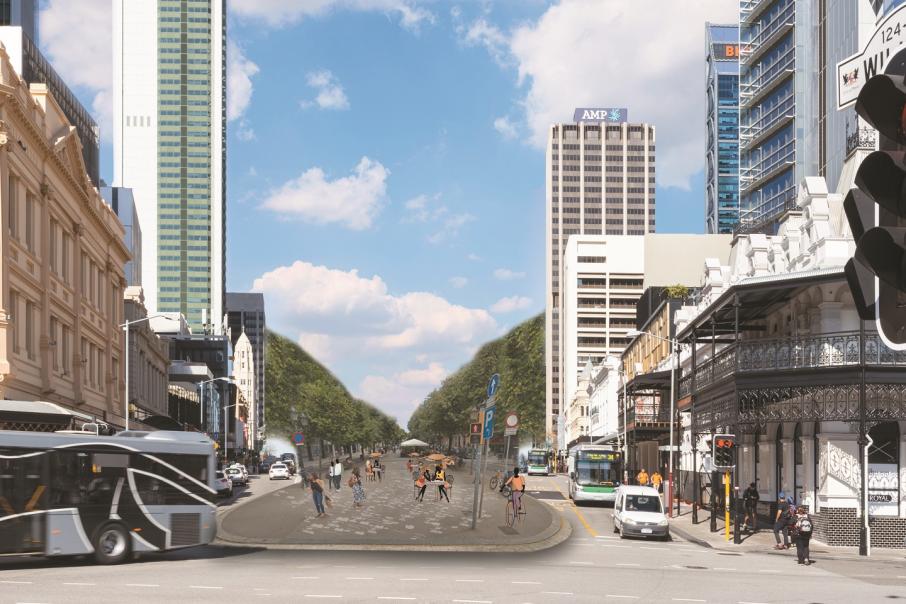 A European-style option for William Street.

OPINION: Despite the seemingly endless alterations to the streetscape of the central city since the Barnett government, the work is incomplete.

Is it cultural appropriation to want to ‘steal’ a great idea from another city and transplant it here?

Ever since visiting Barcelona for the first time earlier this year, I have wondered how we could apply a more European style of road use to a key part of our city, William Street.

I feel there is work left undone since Colin Barnett’s Liberal state government developed Elizabeth Quay on the Perth foreshore and sunk the railway at Yagan Square to join the commercial district with Northbridge.

Somehow these two new and great additions to our capital seem incomplete. I believe William Street, which is the most direct link between the two, needs to be changed.

The obvious Western Australian answer of old was to create a mall. Reminiscent of European town squares, these pedestrian-only areas are a step forward but, after visiting Spain, I think there’s a better option.

While I am unaware of the correct term for what I found was common in Barcelona (and recall from visiting other major European cities), the solution to me lies in making the middle of the road pedestrian friendly while leaving single lanes on either side for light traffic such as commercial vehicles, buses and bicycles (see the artist’s impression illustrating this story)

My preferred examples allowed for restaurants on each side to have a semi-permanent structure in the middle of the road as an extension to their venue. I am sure William Street between Wellington Street and The Esplanade would be suitable for this.

At the moment, that street is something of a wasted asset. Too much of it seems low rent. It is especially deserted and unfriendly at night, the time when its linkage between Yagan Square and Elizabeth Quay would be most needed.

I know some of my city-based friends and contacts will bemoan any suggestion that we press our foot even harder down on the hose when it comes to restricting traffic.

There are some who look back to the city prior to changes 10 years ago, with nostalgia for the ease with which motorists could race through Perth’s high-rise canyons.

There is no doubt that the reconfiguration of the city to make many streets two-way, narrower and friendly to walkers came with considerable pain. Roadworks and subsequent restrictions to car mobility came at the peak of WA’s boom, when there were many more cars on the road and people coming into the city. Traffic jams, already an issue, became worse.

While some I talk to believe the city has been ruined by what is in place, I beg to differ. I am a regular user and have worked out how the city flows (to my advantage), both as a car driver and a pedestrian.

Only Barrack Street seems a major blemish to me; it can be easily gridlocked.

There is a risk that my William Street plan could create a similar situation. However, careful management ought to be able to mitigate this, as well as solve whatever issues I have previously encountered on Barrack Street.

I believe my suggested changes should result in a more lively heart of the city, revamping William Street by making it attractive to hospitality providers and ending the isolation of Elizabeth Quay and its river frontage from Northbridge, the latter being an area that has already benefited significantly from Yagan Square, the RAC Arena, the busport, railway sinking, and other gentrification over the past few years.

Of course, such change comes with pain of construction, which will affect existing tenants who will also then face pressure of a different landscape.

Having said that, the northern end of that part of William Street has already undergone significant renewal in recent years with the 140 William Street and Raine Square redevelopments, not to mention the Wesley Centre.

I believe the area is ripe for further change, which would enhance the value of property there, including historic buildings such as Gledden Arcade.

Most importantly it would finish the job of providing a north-south orientation for the city, which was otherwise forced to head east and west by the railway tracks and the river.