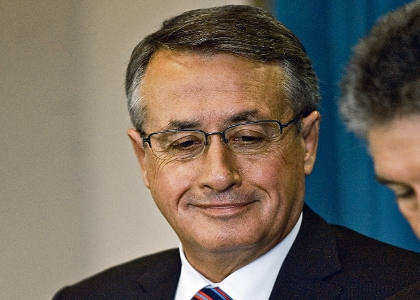 The record $22 billion spent in the nation's shops in February is a further sign low interest rates are supporting the economy, federal Treasurer Wayne Swan says.

Retail spending jumped for a second month in a row in February, marking the strongest start to a year since 2001, while other data released today showed a solid rise in building approvals.

However, retail and housing industry groups aren't getting too carried away, particularly if this perceived buoyancy prevents another cut in interest rates.

Retail spending rose by a much stronger than expected 1.3 per cent in February, to a seasonally adjusted $21.9 billion. This followed a rise of 1.2 per cent in January.

"While some sectors are still facing headwinds from the high dollar and global uncertainty, today's data points to further positive signs outside the mining sector."

Australian National Retailers Association CEO Margy Osmond said she was "cautiously optimistic" but wasn't about to break out the champagne.

"Consumers need to feel confident to spend, so we will hold our breath to see if the Reserve Bank of Australia keeps rates coming down to support confidence," Ms Osmond said in a statement.

The Reserve Bank again left the cash rate at three per cent at this week's monthly board meeting, but said it could ease monetary policy again if the economy needed an additional boost.

He said with small and medium retailers reliant on the minimum wage workforce, "a realistic and manageable" increase was needed, otherwise it would result in further job losses.

Building approvals also rose in February, by a stronger than expected 3.1 per cent to 13,371 units, following two months of declines.

"We have seen indicators of consumer sentiment improve over recent months and we may well be seeing an early sign that this is flowing through to activity on the ground," he said in a statement.

But Master Builders Australia chief economist Peter Jones said the industry had been hoping for a much stronger recovery.

"The feedback from builders is that conditions are still very tough," Mr Jones said.

Macquarie Research senior economist Brian Redican believes the outlook for housing construction will provide a guide over the next year to the health of the economy, faced with the challenge of finding a replacement for the lost growth from slowing mining investment.

"The building approvals data continue to suggest that the recovery in housing construction is not occurring quickly enough for it to play that role," Mr Redican said.