No verdict in Sayers, Bartlett case 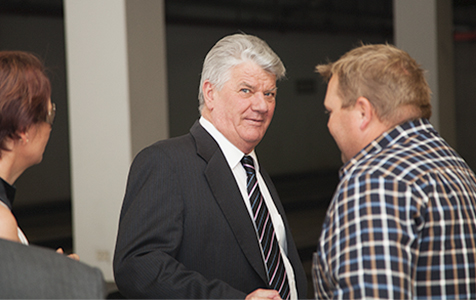 Ron Sayers leaves the court after the jury was discharged. Photo: Attila Csaszar

Mining services entrepreneurs Peter Bartlett and Ron Sayers face the prospect of a new trial next year after a jury was unable to reach a verdict on tax fraud charges.

The 12-week trial resulted in the conviction of one of their co-accused, tax scheme promoter Greg Dunn, and the acquittal of a fourth defendant, junior accountant Deborah Grace.

The jury advised today it could not reach a unanimous verdict, one day after telling Justice Eric Hennan that was the likely outcome.

Justice Heenan then discharged the jury from what he called a "long, difficult and important case".

Justice Heenan said Mr Bartlett and Mr Sayers were released on bail and ordered them to appear at a directions hearing on November 28.

The prosecution, led by senior counsel Paul Roberts, now has to decide whether it wants to pursue a retrial.

Following the jury discharge, Ausdrill announced Mr Sayers will resume all duties as managing director immediately, a position he had kept during the trial but was restricted from doing daily tasks.