No-one is safe from disruption

From power production to online shopping and even diamonds, disruptive technologies are shaking up business as we know it. 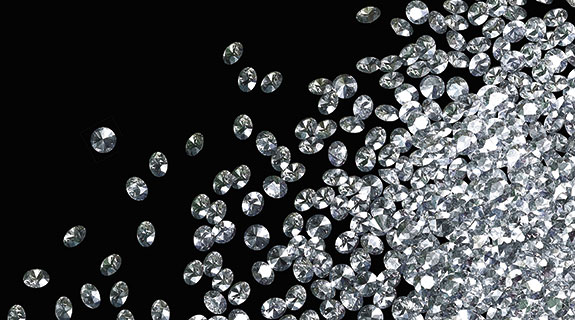 UNIQUE: Synthetic diamonds could pose a threat to producers of the natural product. Photo: iStockphoto

From power production to online shopping and even diamonds, disruptive technologies are shaking up business as we know it.

Diamonds, according to a James Bond movie and its unforgettable theme song by Shirley Bassey, are forever – though that might not be the case if new technologies can deliver a synthetic diamond capable of fooling the most discerning consumer.

Jewellers who have seen past attempts to manufacture diamonds will be quick to reject the concept of man-made gems because the early versions were poor imitations of the real thing.

But what’s happening today in the diamond world has everyone taking notice, because artificial diamonds are starting to hit the market in volumes large enough, and of a quality high enough, to trigger retaliatory action by the ultimate guardian of the diamond industry, De Beers.

Before getting to the detail of diamond developments, it’s important to recognise that the real issue from a business perspective is not jewellery; it’s about how technology can disrupt even the most deeply entrenched industry.

The new generation of man-made diamonds is a warning that disruptive technologies are being developed at a faster pace than ever, threatening to destabilise some of the world’s biggest industries.

Anyone who used to work in a bookshop or, worse still, a shop selling records and music cassettes, has an intimate understanding of disruptive technology (having been steamrolled out of their job by the online media revolution).

But what happened to book and record sellers could turn out to be just a warm-up act for the next phase of disruption, as the pace of technological development threatens everything from jewellery to coalmining and electricity production.

The Tesla home-battery pack, while an embryonic project that may (or may not) perform as promised, but is being taken seriously by electricity producing companies because it could be the missing link that enables home-generated solar power to be stored for overnight use, potentially removing some households as power customers.

Readily available gas, either in liquefied form or delivered by pipeline, is starting to hurt both the coal-mining and oil industries because problems with delivery are being overcome with a glut of LNG about to hit the market (which is why Woodside Petroleum chief executive Peter Coleman launched a stinging attack on coal last week).

Mr Coleman’s criticism of coal had nothing to do with protecting the environment and everything to do with trying to damage a competing fuel at a time when prices for all fuels are falling thanks to improving technologies.

Internet shopping, as every retailer knows, is winning a bigger share of sales, driving down prices and even threatening second-tier shopping centres.

But the disruptive technology that is catching imaginations is the development of artificial diamonds of such a high quality that De Beers and other big diamond mining companies have been forced to retaliate by forming a group called the Diamond Producers Association.

Bankrolled with an initial $US6 million, the aim is to fight synthetic diamonds by promoting natural gems and boosting confidence in natural diamonds.

In essence, De Beers and rival miners such as Russia’s Alrosa Group and Rio Tinto want to differentiate their mined diamonds from something produced in a laboratory – a job that will not be easy because even experts struggle to tell the difference.

What’s happened is that a number of new technologies have been developed to ‘grow’ diamonds, which are in essence nothing but a form of carbon, or up-market coal as someone once said.

Until the new man-made diamonds hit the market, the only real choice for someone who could not afford a two-carat gem was a cubic zirconia, which lacked the sparkle of the real thing.

Not any more, because man-made diamonds are made of the same stuff as the real thing, only cheaper.

Until now, most consumers would not have been interested in a synthetic diamond; however De Beers and the other diamond miners have kicked an own goal by forming the Diamond Producers Association.

In forming an anti-synthetic marketing organisation the diamond miners have acknowledged that the artificial product is a serious threat – because it is (almost) as good as mined gems.

The diamond experience is a sobering lesson for other businesses because it shows that no-one is safe from disruptive technologies.

SOMEONE always does well in an economic downturn, and one of the businesses doing better than most these days is a company you’ve probably never heard of – Credit Corp Ltd.

Originally a debt-collection business based on a centuries-old process called factoring (buying a debt at a discount and then trying to collect the debt in full), Credit Corp has blossomed out into the field of small loans to people unable to get a bank loan.

No prize for guessing that it’s not a very nice business and often the subject of complaints to consumer protection agencies.

But there’s also no prize for guessing that it’s been doing very well over the past 12 months as tougher times hit the economy and people who have lost their jobs struggle to repay their debts, or are forced to raise cash from a lender of last resort, such as the rapidly growing online credit sites such as Nimble, Wallet Wizard and Cash Train.

While the share prices of conventional banks have been under pressure recently (Westpac is down 10 per cent from this time last year) Credit Corp’s share price is up 30 per cent from $8.85 to recent sales at $11.68.

Not many advisers will tell you that because they risk forfeiting fees, but most people who have retired recently are struggling to survive on what they thought would be enough to fund a reasonable lifestyle.

Whereas $1 million was once the target considered enough to generate an income of around $55,000 a year (5.5 per cent on a bank deposit), the same lump of capital today will earn around $30,000.

Not only has the interest rate goalpost been moved, the Australian government has fiddled with the age-pension entitlement goalpost.

A solution finding appeal with growing numbers of older workers is to put retirement off. And while it might seem harsh on them, it’s actually much worse for young workers hoping to move up the corporate pecking order but finding the way blocked by a crowd of geriatrics.