A final investment decision on the state’s next major greenfields iron ore project could come as early as next year, after Balla Balla Infrastructure Group today signed a state agreement with the government for a new transhipment port and rail facility in the Pilbara. 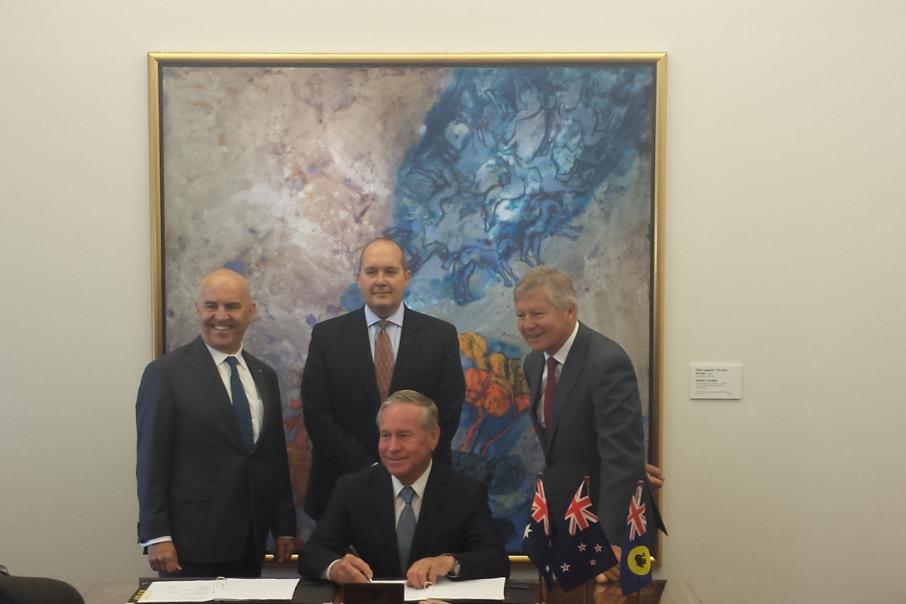 A final investment decision on the state’s next major greenfields iron ore project could come as early as next year, after Balla Balla Infrastructure Group today signed a state agreement with the government for a new transhipment port and rail facility in the Pilbara.

Construction of the $5.6 billion project won’t begin until an offtake deal and financing have been finalised, however, with about $2 billion to be spent on the mine and more than $3 billion on a railway and port.

It is anticipated that the development will export 50 million tonnes of ore each year.

Balla Balla chairman Jon Young said there would be a continued need for large-scale iron ore developments in the years ahead.

“Our view is that the world actually needs one to two Balla Balla projects every year just to deal with organic growth and the restructuring of the Chinese steel industry,” he said.

Mr Young said China was incrementally moving towards seaborne iron ore, away from other deposits.

“Our view is that this is the most competitive world scale greenfields iron ore project on the face of the planet,” he said.

“This is a low margin competitive business.

“Any project has to be able to survive the bottom of the cycle; we believe it is economic right through the cycle.”

Mr Young said the project would primarily be a hematite operation, although the company’s magnetite project closer to the coast could become feasible after the infrastructure was built.

Todd acquired Rutila in a deal announced in mid 2015.

Balla Balla said the infrastructure built will be common user, with plans to negotiate to allow holders of other nearby deposits to ship ore via the port and rail.

One potential operator is Flinders Mines, in which Todd holds a 52.6 per cent stake after a takeover bid last year.

“We don’t have an agreement with Flinders at the moment but Todd is the controlling shareholder of flinders, and we are hopeful that we’ll be able to reach a mutually satisfactory solution for them to be able to access our infrastructure if that's what they'd like to do, Mr Young said.

“Balla Balla has also got other arrangements in place.

“There are lots of stranded iron ore resources in the central pilbara, and we’re engaged with all the owners of those resources.

“We think Flinders is a natural customer for our project, but we have other options and other customers.”

Premier Colin Barnett said that, after annual iron ore production doubled in a decade, there would now be replacement and expansion projects that would keep production around 750mtpa.

"This state agreement includes a requirement for local industry participation and community development plans to be submitted to the government for approval, maximising the benefits of the project for West Australians," he said.

"While there are still a number of hurdles for the proponent, it's estimated when it gets under way, the project will generate 3,300 jobs during construction and 910 jobs once operational.

"The proposed export facility will use custom-built barges to transfer ore onto ships, reducing costs and environmental impacts."