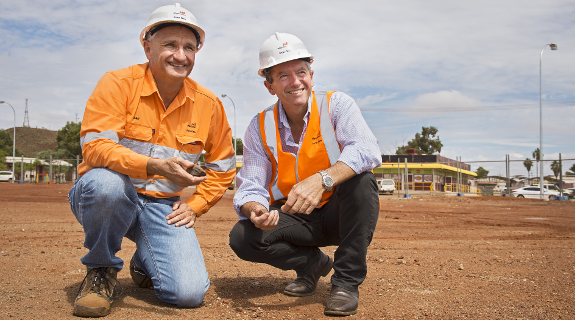 A $70 million property development planned for the Pilbara mining town of Newman has brought together a couple of unlikely bedfellows and, in the process, created uncertainty for some existing retailers.

The project includes $40 million worth of new roads, upgraded infrastructure and an open and shaded community meeting place funded by the state's Royalties for Regions program.

BHP Billiton is also providing a $30 million investment for a new shopping centre, in collaboration with Perth-based not for profit St Bartholomew's House.

It was also one of the largest community investments the company has made in Australia.

St Bart's board director Bevan Sturgess-Smith said while many would wonder why a NFP would enter the retail environment, the organisation had previous experience overseeing the construction and management of its $32 million accommodation project in East Perth.

The partnership, which includes a 30-year contract to run the centre, provides a new long-term funding model for St Bart's, which is currently investigating how it will invest more in the Pilbara community.

In addition, a portion of the centre's profits will be directed into a trust to support and provide grants for community activities in Newman.

"This innovative model sets a new standard in corporate philanthropy and ensures that our bricks and mortar investment translates into positive, long-lasting economic and social benefits for the local community," Mr Wilson said.

While the local council, the state government and developers have praised the partnership's philanthropic features, the centre's location –directly across the street from an existing retail centre – has come under fire from the Newman Boulevard centre manager.

Davyd Hooper told Business News the existing centre had lost tenants in the past 12 months following a downturn in iron ore prices and a flow-on negative effect to the local economy.

While supportive of the state government's efforts to redevelop the town centre, Mr Hooper questioned the timing of opening a new retail centre while other stores were struggling.

"It's quite concerning," Mr Hooper said.

In the past 12 months a coffee shop, women's clothing store Rockman's and fast food chain Chicken Treat have vacated the 6,500sqm shopping centre, he said.

Mr Hooper said remaining retailers, with the exception of Woolworths, which invested in a refit of its shop and re-signed a 20-year lease in 2012, were in a holding pattern and would not commit to long-term leases.

Newman Boulevard centre was built in 1984 and is owned by Cockles, which also has four other retail centres in regional Western Australia.

Mr Hooper said despite long-term support for a project of the kind proposed by BHP and Regional Development and Lands Minister Terry Redman, the addition of a new shopping centre would cause short- to medium-term pain for current retailers.

"You can take a long-term view that the population will go to 15,000 and that may happen but what happens in the mean time, you're putting the cart before the horse," he said.

"Yes I understand there are some empty shops in there ... but this is going to be a new and vibrant centre, we're looking to bring in some new retailers," Mr Sturgess-Smith said.

"I think there's enough business for everybody in the town."

Mr Redman also highlighted the need for positive change in the mining town.

"I think the Newman community over the years has struggled to get to the point where it's a city that people actually want to live in and be a part of and I think that's been a strong focus of state government," Mr Redman said.

"If you rewind two to three years, every single bit of infrastructure in this community was under pressure to be able to cater for growth ... if we don't take a long-term vision with communities, then that's being extremely short sighted."

Mr Wilson said BHP had chosen to invest in Newman because, despite the cyclical nature of commodity prices and their current lows, the company was committed to developing Newman's future.

"We'll be in the Pilbara for centuries, never mind decades," he said.

"Fundamentally we like things that are sustainable, that's why we put this model together; it's going to create new vibrancy in the city centre ... citizens of Newman can go and relax and enjoy themselves and some retail."

St Bart's has appointed Colliers as the manager of the new centre and has signed one tenant so far, Dome cafe.

There is scope for an anchor tenant, likely to be Coles or IGA, as well as up to 11 other shops.

See next week's paper for a comprehensive report on the community investment aspect of this story as well as more detail on Newman's retail market.

• The reporter traveled to Newman courtesy of BHP Billiton.