New stadium to be shorter than Subi: Barnett 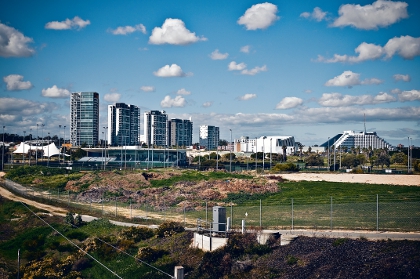 The proposed site of the new stadium, in Burswood.

Premier Colin Barnett has revealed Perth’s $700 million major stadium will be the AFL’s second largest capacity home field, despite being shorter and wider than Patersons Stadium.

Mr Barnett said today the new field, which will be built on the Burswood Peninsula, would have an east-west orientation, the same as Patersons Stadium and the MCG.

The playing surface will be 165 metres long, and 130 metres wide, Mr Barnett said, wider and shorter than the 175m by 122m Patersons Stadium.

Mr Barnett said the orientation met the requirements of the International Cricket Council and would provide optimal viewing for rectangular field sports, such as soccer or rugby.

The Premier said the stadium would have an initial capacity of 60,000, but will be designed to allow expansion initially to 70,000 and potentially up to 80,000, should demand warrant.

“The important thing about these announcements is that they form the foundations for all of the other design requirements for the stadium,” Mr Barnett said.