A mix of tenants are moving into CBD space vacated by resources companies. 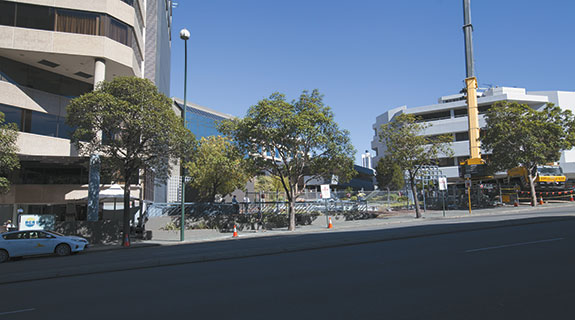 PRECINCT: Channel Nine plans to build a media campus at the top end of the Terrace. Photo: Attila Csaszar

A mix of tenants are moving into CBD space vacated by resources companies.

CHANNEL Nine’s impending move into the city from its long-time Dianella base is a sign of things to come for CBD office markets, with landlords looking beyond the traditional big users of space from the mining sector to take up space in empty office buildings.

Last week, Channel Nine unveiled plans to build a studio in the CBD, agreeing to lease 2,500 square metres at 253, 255 and 257 St Georges Terrace from Primewest, as reported online by Business News.

The studio and new headquarters will include a public plaza, complete with a video screen, while the public will also be given access to the television station’s news studio and be able to watch broadcasts as they happen.

“Channel Nine is a non-traditional user that’s come into the CBD to take up the use of that space, and to chip away at that vacancy rate,” Mr Clapham told Business News.

“It also ties in nicely to the City of Perth’s plans for the CBD, in trying to create spaces with interest and activation, by bringing life and giving people different reasons to visit the city.”

Traditionally, the lion’s share of office space in Perth’s CBD has been taken up by mining or mining-related tenants.

While demand has slowed significantly as commodity prices dipped, 38 per cent of the total office stock leased in the 12 months to the end of March was by the mining sector.

But pundits are tipping the make-up of CBD office users to change significantly in the near future, with landlords expected to target non-traditional tenants.

Deloitte financial advisory partner Matt Judkins told attendees at a recent Property Council of Australia event that agribusiness, tourism, education and health-care tenants would be the focus of office landlords as demand from the resources sector waned.

The momentum is building; two of the largest leasing deals of 2014 were to education providers, with St Georges College signing up to shift from Murdoch to 2,500sqm of space at 50 William Street, and Navitas moving from its Applecross home to take up 1,692sqm at Brookfield Place.

Speaking at the PCA event, JLL managing director John Williams said the reduction in rents that had occurred over the past 12 months, particularly for B and C-grade stock, was creating opportunity for businesses that had previously been priced out of the CBD market.

“In the last five years in particular, a lot of the larger owner occupiers have been priced out of the market and have never had an opportunity to come into the CBD,” Mr Williams said.

“There is a big opportunity if landlords are that way inclined to target those sorts of users.”

According to a recent report by commercial agency Savills, net face rents for B-grade office stock have reduced, on average, from $525/sqm to $395/sqm.

Mr Williams said his agency had B and C-grade leases on offer for $350/sqm, and flagged further falls to around $250/sqm.

“If the universities have run out of accommodation on campuses, you can offer second-hand space in the CBD that’s vacant at more economic rates than they’ll be able to build new facilities,” he said.

“There is a big opportunity there; you go into a lot of cities around the world and education and health are very big occupiers in the CBD.

“Education brings people in, which then feeds into your restaurants and cafes and changes the whole environment of the city.”

Primewest chief executive Julian Lodge told the PCA event he was concerned over the softening of demand from mining and mining services tenants, but had also been pleasantly surprised by the level of inquiry from other sectors.

“We’ve had inquiries from IT tenants, health, lawyers, so it’s actually been quite widespread,” Mr Lodge said.

“We hear a lot about end-of-trip facilities and we hear a lot about amenities in buildings, but these things are actually incredibly critical in attracting companies that are either new entrants or moving from other space.

“We are seeing activity, it’s a more challenging market, but we are doing deals.”

Leighton Properties senior development manager Michael Barr acknowledged the leasing market was generally soft, but said he was confident the developer would be able to find a tenant to anchor the vacant tower at Kings Square, which is rapidly nearing completion.

“The market is soft at the moment but at the same time we have confidence in the product,” Mr Barr said.

“Generally what happens is when incentives increase, that provides opportunities for tenants to move out of the sub-quality stock and into A-grade stock in a good location.

“We’re confident we will get tenants, there are tenants that are active at the moment and that’s where our focus is at the moment.”