The planned Westport development in Kwinana will be government owned, Premier Mark McGowan said, with claims it would cost less than extending operation of Fremantle harbour. 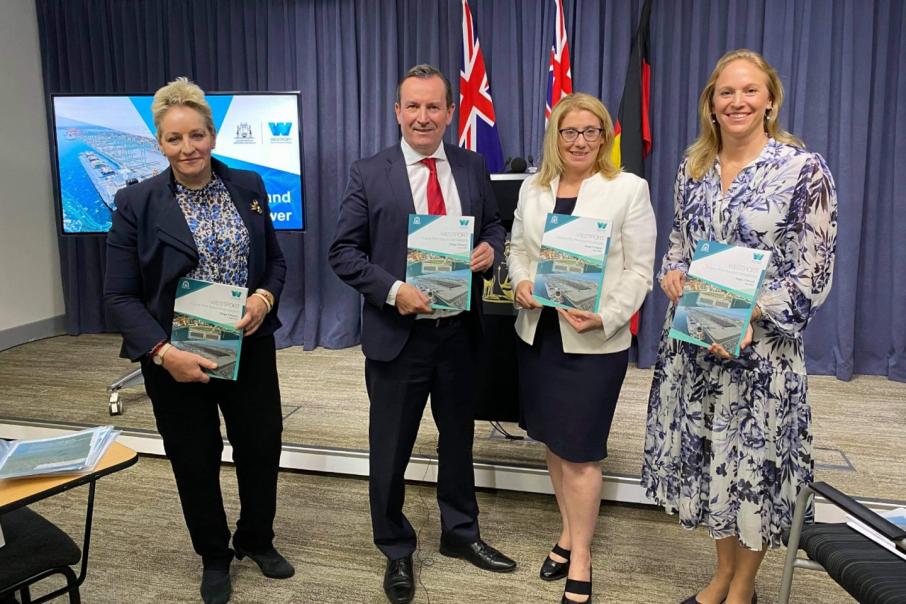 The planned Westport development in Kwinana will be government owned, Premier Mark McGowan said, with claims it would cost $3 billion less than extending operation of Fremantle harbour.

Mr McGowan announced $97 million today to move planning on a new port in Cockburn Sound to the next step, with completion expected in 2032.

There are two options under consideration for the development, with a business case still yet to be finalised.

The new port would cost either $4 billion or $4.7 billion, depending on the pace of transitioning freight from the existing inner harbour in Fremantle.

The figure would include transport upgrades but not land acquisitions, according to the Westport task force.

That included redeveloping the existing berths in the 2040s, and capacity investments into the freight network.

The breakdown was $2.3 billion for upgrading the road network servicing Fremantle, $2 billion for Roe 8 and 9, $500 million for a last mile into the port, $1.4 billion to duplicate and sink the rail line and $2 billion for port works including dredging.

Although the taskforce did not assess the cost of a potential Roe Highway extension into the port, chair Nicole Lockwood estimated the price tag would be similar.

The Westport task force estimated a cost benefit ratio for a new development of between 1.55 and 1.76, depending on the option selected.

For context, it had been reported that the Roe 8 project would have a cost benefit ratio of around 2.5, although it is unclear whether that analysis used the same assumptions.

“We are uniquely positioned to be able to have a port that takes traffic away from the city,” Mr McGowan said.

“There will need to be a new port, it will have to happen.

“The real question is, do you want to spend billions on a port funneling traffic into the city [Fremantle]?”

When asked if a public-private partnership would be considered for the project, Mr McGowan said it would be publicly owned and operated.

The new port would also shave about $100 per container unit off export freight costs, according to the state government, representing a saving of around a third.

“We can’t allow our exporting industries to suffer because we have 20th century infrastructure,” Ms MacTiernan said.

Westport and the extension of Roe Highway could well be a key battleground in the lead up to a state election in March 2021.

Shadow transport minister Libby Mettam told Business News it was already well known that a new port would be needed, and criticised the lack of immediate action to fix congestion in Perth’s south.

“The outer harbour was meant to be the government’s answer to addressing congestion issues,” Ms Mettam said.

She added that building Westport by 2032 would not create jobs in the near term, as the state recovered from COVID-19.

Ms Mettam said the state opposition was still intending to campaign on building Roe 8 and 9.

Former City of Melville mayor Russell Aubrey expressed similar concern about traffic in the decade ahead.

One assumption that may generate debate is about container movements, with the announcement today estimating five-fold growth by 2068.

That would mean about 3.8 million 20-foot equivalent units annually, although the new port will have capacity for 4.5mteu per year, the report said.

A Deloitte analysis for Westport last year estimated container trade would reach 3.1mteu by 2067-68 in a baseline case at Fremantle, or as high as around 3.8mteu in a strong growth scenario.

But an alternative scenario had much lower container traffic, as low as about 2mteu.

In Deloitte’s 2018 analysis, a global shock driven by a Chinese banking crisis would lead to much lower global growth, affecting Western Australian trade.