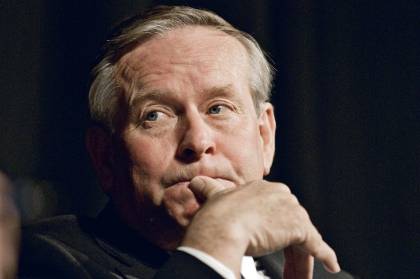 One day after being heckled by environmental protesters in Broome, premier Colin Barnett has announced plans to make the world-renowned Horizontal Falls in the Kimberley part of a new national park.

Both parks will be Class A, giving them the highest possible protection.

The marine park will stretch south of Camden Sound including Talbot, Collier and Doubtful bays and Walcott Inlet.

It will protect coral reefs, dolphins and mangrove systems.

Environment Minister Bill Marmion says final borders will be decided after consultation with traditional owners and other stakeholders.

“Existing pearling leases will remain and the creation of the marine park will help ensure continued high water quality for pearling.”

In addition, the new park will not include Koolan and Cockatoo islands as these have existing iron ore mines.

WWF spokesman Paul Gamblin said given the ever-encroaching threat of mining and gas development in the Kimberley, new protected areas on land and in the sea were essential.

"Many more will be needed to give the community confidence that these special natural and cultural areas will be protected," he said.

"Looking after the Kimberley, not allowing it to be damaged, must be the priority."

Conservation Council of WA director Piers Verstegen said the new conservation parks were a big step towards the creation of a Great Kimberley Marine Park, which would rival the Great Barrier Reef in terms of its significance, protection and tourism opportunity.

Environs Kimberley also welcomed the announcement, but warned that if the gas hub at James Price Point near Broome went ahead, it would undermine the conservation initiative.

On Sunday Mr Barnett promised rowdy protesters there will be a public forum on the controversial gas hub.

He made the pledge after being heckled by about 120 protesters when he paid a pre-election visit to Broome on Sunday.

The premier answered questions from the crowd, made up mostly of families, holding signs that read "Barnett bullying Broome", "We love Broome the way it is", "Let it go Barnett. History will love you" and "No gas at JPP".

Mr Barnett promised the group he would hold a public question and answer session with locals to address their concerns, but did not say when.

Broome Community No Gas Campaign spokesman Nik Wevers said campaigners were angry their fears about the future of community life in Broome had been ignored.

"We are being bullied into submission by the Barnett government to accept this project," she said.

"It will destroy our community, our culture and our country, and we are not prepared to lie down and take it.

"No decision on approval for the project should be made until the issue of social impacts has been addressed to the satisfaction of the Broome community."