New gold mining projects under way or in advanced planning will collectively deliver more than 1 million ounces to production each year when operational. 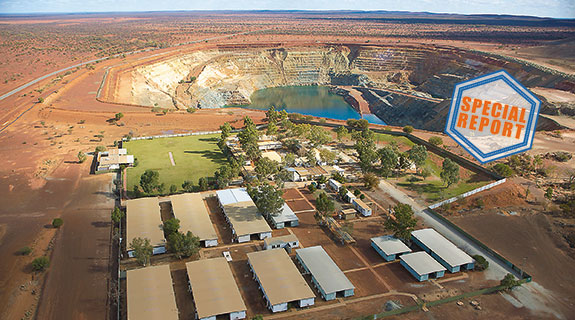 DIGGING IN: Ramelius Resources is investing $16 million at its Vivien gold project.

New gold mining projects under way or in advanced planning will collectively deliver more than 1 million ounces to production each year when operational.

In most cases, the new mines will enable existing producers with strong balance sheets and strong cash flow to get even bigger.

In addition, however, companies including Gold Road Resources, Blackham Resources, and the misleadingly named Pacific Niugini will join the ranks of Western Australia’s gold producers.

The common theme for nearly all of these projects is that they are budget developments, taking advantage of existing infrastructure to minimise costs. 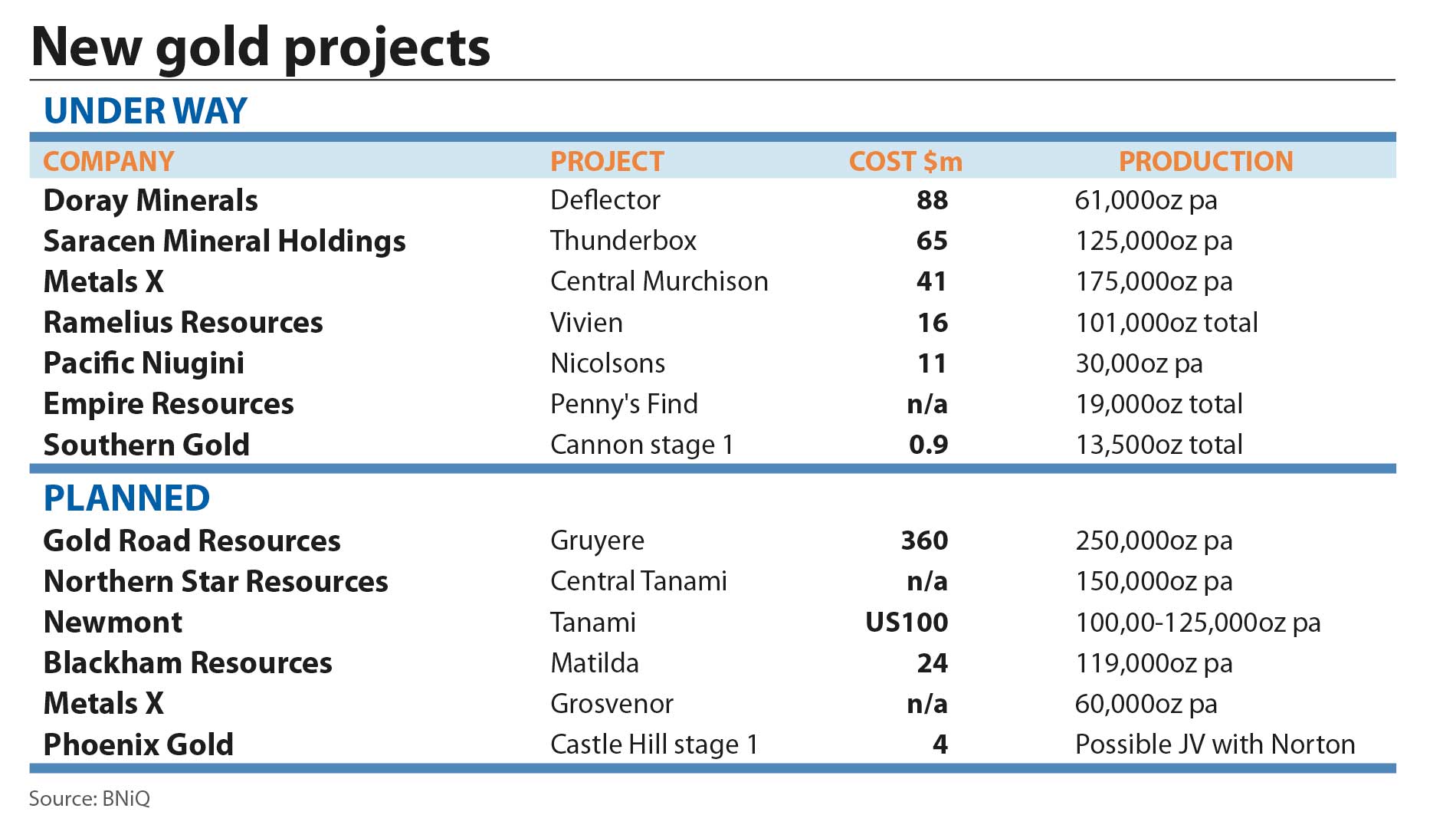 The feasibility study undertaken by Panoramic envisaged building a new process plant and infrastructure on site at an estimated cost of $140 million.

In contrast, Metals X plans to rework the project’s three main deposits as part of its existing Higginsville gold operations, with the ore transported 70 kilometres to its Higginsville plant for processing.

Mt Henry has an estimated resource of 1.66 million ounces.

It’s the latest in a series of acquisitions Metals X managing director Peter Cook and other savvy mining veterans have undertaken over the past three years.

One the same day that Metals X bought Mt Henry, it announced the purchase of the Grosvenor project from the heavily indebted RNI.

With plant and infrastructure in place, Metals X is targeting production of 70,000oz per year at Grosvenor, which it described as another low-risk, low-cost, startup.

These acquisitions add to the Higginsville operation and its South Kalgoorlie and Central Murchison projects, where it has recently started development.

Metals X is targeting annual production of 175,000oz over the 13-year life of the Central Murchison project, which involves redevelopment of multiple historic mines around Meekatharra.

Expenditure to date on the Central Murchison project has totalled $22 million, with the company estimating total cash outflows of just $41 million.

Adding in its early-stage Rover project in the Northern Territory, Metals X is aiming to lift annual production to more than 500,000oz in 2019.

Doray Minerals and Saracen Mineral Holdings are also aiming to move up the gold producers’ ranks by adding a second mining centre to their existing operations.

Doray has started site works at its Deflector project, with the final go-ahead on the $88 million project subject to completing its financing.

“We expect funding to be finalised this quarter, with the bulk provided by a competitive debt package,” Mr Hughes said in a research note.

PCF Securities rates Doray as one of its top picks in the sector, with good ongoing production, substantial exploration upside and the Deflector development.

“With operations going well, the completion of the Deflector financing should provide an important catalyst on the corporate front,” PCF senior resources analyst Andrew Muir said.

The next major development milestones at Deflector will be construction of the new village and processing plant in coming months, and the start of open pit mining in early 2016.

“The company also has one of the better growth profiles, with Thunderbox allowing Saracen to double production from the current 160,000oz pa to 300,000oz pa within the next two years,” he wrote in a research note.

“We see upside potential to the growth guidance, with Carosue Dam showing potential to produce in the order of 200,000oz pa after establishing underground mines at Deep South and Whirling Dervish.“

Like many gold miners, Ramelius Resources is constantly evaluating new mine sites to replace exhausted deposits.

Its Kathleen Valley mine, developed at a cost of $1.5 million, will have a production life of 1.5 years, while its Vivien mine, which will cost $16 million to develop, will have a life of three years.

This type of spending is part of the normal course of business for most established miners.

Similarly, Northern Star Resources is planning to spend $39 million on expansion this year, and a further $35 million on exploration.

Most exploration spending is focused on brownfields activity – highly prospective, near-term targets close to existing mine and processing infrastructure.

Saracen has a $20 million exploration program, with seven drill rigs, while Silver Lake Resources plans to lift its exploration spending by 60 per cent to $15 million, as a result of the strong current and projected cash position of the company.

Gold Road Resources’ Gruyere project in the eastern Goldfields is the biggest of the potential WA mining projects at an advanced stage.

A scoping study released in January was based around a large-scale open-pit mine, a narrow-vein underground mine, and a conventional carbon-in-leach processing facility.

The base case involved an up-front capital cost of $360 million to support annual production of 190,000oz.

Gold Road has subsequently completed a pre-feasibility study for stage 1 of Gruyere, with ore throughput of 7.5 million tonnes for production of 250,000oz over 10 to 15 years.

Executive chairman Ian Murray said Gruyere’s gold resource had grown by 44 per cent since completion of the scoping study.

“This has allowed the study team to examine higher throughput scenarios,” he said.

“With the upgrade of the Gruyere resource, we are pleased to report that the project has the critical mass to support the larger scale 7.5mtpa operation over a longer mine life.”

Gold Road raised $39 million from investors earlier this year, which will enable the company to complete the full pre-feasibility study for Gruyere by early next year.

That will be a critical milestone, as it will give investors more insight into the project’s capital and operating costs.

West Perth-based Blackham Resources is more advanced with its Matilda project, which will be developed at a much lower cost by taking advantage of existing plant and infrastructure.

The project is based on annual production of 119,000oz.

Blackham secured a $38 million finding package with Orion Mine Finance in May, giving it the capacity to complete a definitive feasibility study and undertake the estimated $24.6 million in start-up capital spending needed to recommission the Matilda project.

“The Orion financing gives Blackham a fully funded solution to being the Matilda gold project into production,” managing director Bryan Dixon said at the time.

The Tanami region, which straddles the border of WA and the Northern Territory, is set to attract two big new investments from established miners.

US-based Newmont is evaluating the construction of a second decline at its existing Tanami mine, at a cost of between $US100 million and $US120 million.

The project would add extra gold production of up to 125,000oz at lower costs and extend the mine life by three years.

If approved later this year, the additional production would come on line in 2017.

A second project in the same region will be bankrolled by Northern Star Resources, which has struck a deal with listed company Tanami Gold.

Northern Star has outlaid $20 million in cash and shares to acquire an initial 25 per cent stake in the Central Tanami gold project.

It will then earn a further 35 per cent stake by funding all expenditure to bring the project back into commercial production.

This is defined as refurbishing the process plant and bringing it back into production for at least 30 days, or until 5,000oz of gold has been produced.

From that point, Tanami Gold has two put options to sell the rest of the project to Northern Star Resources for a further $52 million.

Before starting the refurbishment, Northern Star Resources intends to drill out the main Groundrush deposit with the aim of substantially increasing the existing resource of 1 million ounces.

There are also numerous opportunities to evaluate past-producing pits and depth extensions before starting underground mining in 2016-17.