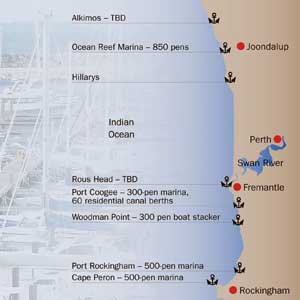 There is only one development currently under way, at Port Coogee south of Fremantle, but the shortage of boat pens in Perth has fuelled increased interest in new developments.

As well as providing pens for frustrated boat owners who have nowhere to park their craft, the new proposals are expected to be a catalyst for residential and commercial investments along the coast.

The trigger for the upswing in marina proposals has been a significant predicted increase in the number of recreational boat registrations in Western Australia.

A Department of Planning and Infrastructure report, 'The Perth Recreational Boating Facilities Study 2008', predicted recreational boat numbers in Perth would increase from 48,468 in 2007 to 84,857 in 2025.

The proposed developments extend from Yanchep in the north to Rockingham in the south.

With the exception of a 300-pen stacking facility proposed at Woodman Point, the developments are about much more than just extra room for boats.

The largest proposal is an 850-pen marina at Ocean Reef. The City of Joondalup is currently seeking a developer for the project, estimated to cost $800 million.

Alongside the boat pens, the concept plan calls for a four to five-star hotel resort with convention facilities, as well as a water playground, kiosks and restaurants, picnic areas and sheltered beaches, plus an extensive range of retail facilities.

The City of Joondalup endorsed the Ocean Reef marina structure plan in May this year, and is currently examining public submissions on the proposal.

The Department for Planning report also identified the possibility of a 250-pen increase in capacity at the existing marina at Two Rocks.

The Town of Rockingham's status as a primary regional centre under the state government's Directions 2031 planning framework has received a boost from two significant marina proposals.

While Rosewood Grove maintains Port Rockingham is a modest development when compared to other marinas in the metropolitan area, the plans also call for cafes, restaurants, tourist shopping and service outlets and boat sales.

Last week the RKDO, which represents state and local government agencies with an interest in the area, began seeking expressions of interest from developers to advance the proposal.

Australand's 360-pen Port Coogee development is another mixed-use marina, with construction well under way on $2 billion worth of residential, commercial and recreational developments.

Two new marinas are also proposed in the Alkimos-Eglinton region to the north of Joondalup.

At Alkimos, state-owned agency LandCorp wants to put a marina as part of a coastal node on land previously owned by the Water Corporation.

That project is seen a key early element of the phased development of the region, with the coastal attraction providing jobs and higher density living as a catalyst to sustaining public transport from the outset.

A few kilometres north, Eglinton Estates retains the approvals for a marina development originally linked to a failed resort and golf project, which was to be funded by Japanese investors in the late 1980s.

A potential marina development at Rous Head in North Fremantle is currently being evaluated by a Fremantle Port Authority taskforce.

The site has been the subject of much contention over more than a year, after a consortium of private developers sought to progress the ambitious North Port Quay development, which included a 2,500-pen island marina.

Premier Colin Barnett has failed to support that proposal but has spoken in favour of a smaller marina development at Rous Head.

“Hillarys is a perfect example of how a top-class marina can stimulate growth in an area," Ms Goostrey said.

“The revamp of the marina there was a catalyst for the vibrant residential, commercial and social scene that Hillarys is now famous for.

“If they're properly built, properly managed and have the right facilities in them, they have a significant impact on the real estate prices in surrounding developments."