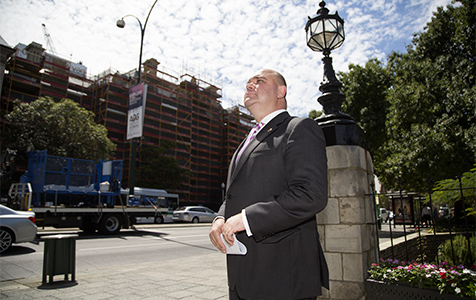 New hotel developments in Perth and Fremantle will add up to 2,500 rooms during the next five years, with this number potentially growing to more than 4,000 if several proposed projects go ahead.

Data released by the Australian Hotels Association today showed there was more than $3 billion worth of investment in Perth and Fremantle’s hotel development pipeline.

The proposals total 4,300 rooms under substantial development, and 800 under consideration, with 4,400 planned for Perth and surrounding suburbs, and 700 rooms for Fremantle, the AHA said.

The AHA estimates there are currently 10,500 hotel rooms in Perth, which operated at 83 per cent of capacity in the year to June 30 2013, according to research by Colliers International.

About 1,900 rooms are required by 2020 to keep pace with corporate and leisure demand, according to the state government’s strategic tourism plan.

AHA WA chief executive Bradley Woods said 200 new hotel rooms would definitely be opened over the next 12 months, with that number growing to 500 over the next three years and increasing to between 2,000 and 2,500 by the end of the decade.

The balance of the new rooms depends on developers going ahead with proposals that are currently in the early stages of the planning process.

Other significant plans include Crown's $568 million, 500-room luxury hotel at Burswood, a $95 million, 217-room hotel at the Ace Cinema site in Subiaco, a $280 million Amara Business Hotel on Adelaide Terrace, as well as a $350 million, 120-room hotel at the Old Emu Brewery site on Mounts Bay Road.

Mr Woods said the sheer scale of the proposed developments created a risk of oversupply in the market, but was confident the tourism industry, the hotel sector and the state government could work together to stoke demand.

“If the hotels are built, we’ve simply got to meet the challenge of attracting more visitors to the state,” he said.

The state government in 2011 launched a raft of initiatives aimed at alleviating Perth’s hotel room shortage, including the release of Crown land for hotel projects and longer-term leases for short-stay accommodation developments.

“What that’s resulted in is a new level of interest and confidence from hotel developers, investors, and hotel management companies from all throughout the world, but also from Western Australian companies with substantial experience in hotels also investing again in the market,” Mr Woods told reporters today.

“In the past, the level of disincentive that was there effectively through the planning requirements meant that we weren’t seeing the level of investment that was needed to meet and match the resources and mining boom.

“Those changes substantially shifted that. We are now on a better level playing field to capital cities on the east coast and overseas so it has made a huge difference.”

Mr Woods said the massive increase of hotel rooms would have far-reaching effects on the WA tourism sector, as well as the corporate exhibition and convention industry.

“If we see an additional 4,000 rooms being built within Perth and Fremantle, it certainly means that some of the largest international conventions, exhibitions and conferences that are hosted around the world could well be handled by Perth,” he said.

“We demonstrated during CHOGM that we are able to meet the demands of 5,000 people, but it means going forward, upwards of 8,000 to 9,000 people could be hosted in Perth.”

Tourists are also expected to benefit from a broader range of hotel options and price points, Mr Woods said.

See the list of current Hotels & Resorts in WA on BNIQ.