Record building approvals in 2013-14 have resulted in an all-time high of dwelling commencements in Perth, but the latest data show housing construction may have hit the peak of the cycle. 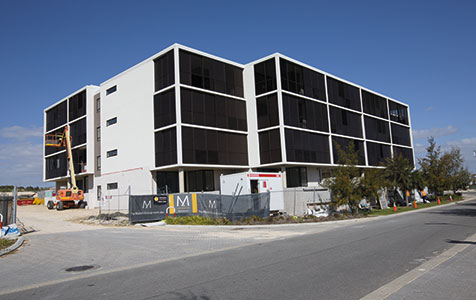 BUILDING UP: Apartment construction in Perth is yet to reach all-time highs, set in 1989 and 1994. Photo: Attila Csaszar

Record building approvals in 2013-14 have resulted in an all-time high of dwelling commencements in Perth, but the latest data show housing construction may have hit the peak of the cycle.

The latest figures from the Australian Bureau of Statistics showed a 20 per cent increase in dwelling commencements in 2013-14, with a new high of 28,996 dwellings started, surpassing the previous peak of 26,983 in 1988-89.

The ABS said there were about 22,500 dwelling under construction in the Perth metropolitan area, with 14,905 of those being detached houses, and 7,511 in the multi-residential sector.

Real Estate Institute of WA executive manager of research Stewart Darby said the level of construction appeared to have peaked, with approvals trending down over the past few months.

“One very salient point from the work under construction is that the building industry at this point in the cycle is pushing work through to completions despite record levels of commencements,” he said.

“This contrasts to the previous record level of 23,779 dwellings under construction in the year to March 2007 when the sector was competing with the resources sector.”

Mr Darby said another surprising statistic was the level of multi-residential commencements in 2013-14, covering apartments, units and townhouses, which was well below record levels.

There were 6,303 multi-residential starts in 2013-14, representing 22 per cent of the total housing starts over the year.

“In these years, this sector represented 28 per cent and 27 per cent of total commencements, highlighting the decline of this sector over the past 20 years.”

However, Mr Darby said there were a significant number of approved apartment projects yet to commence.

“What is evident from the data is the consistent higher level of multi-residential approvals held by developers but yet to commence since the GFC in 2008,” he said.

“It is widely accepted that not all multi-residential approvals proceed to construction for a number of reasons.”